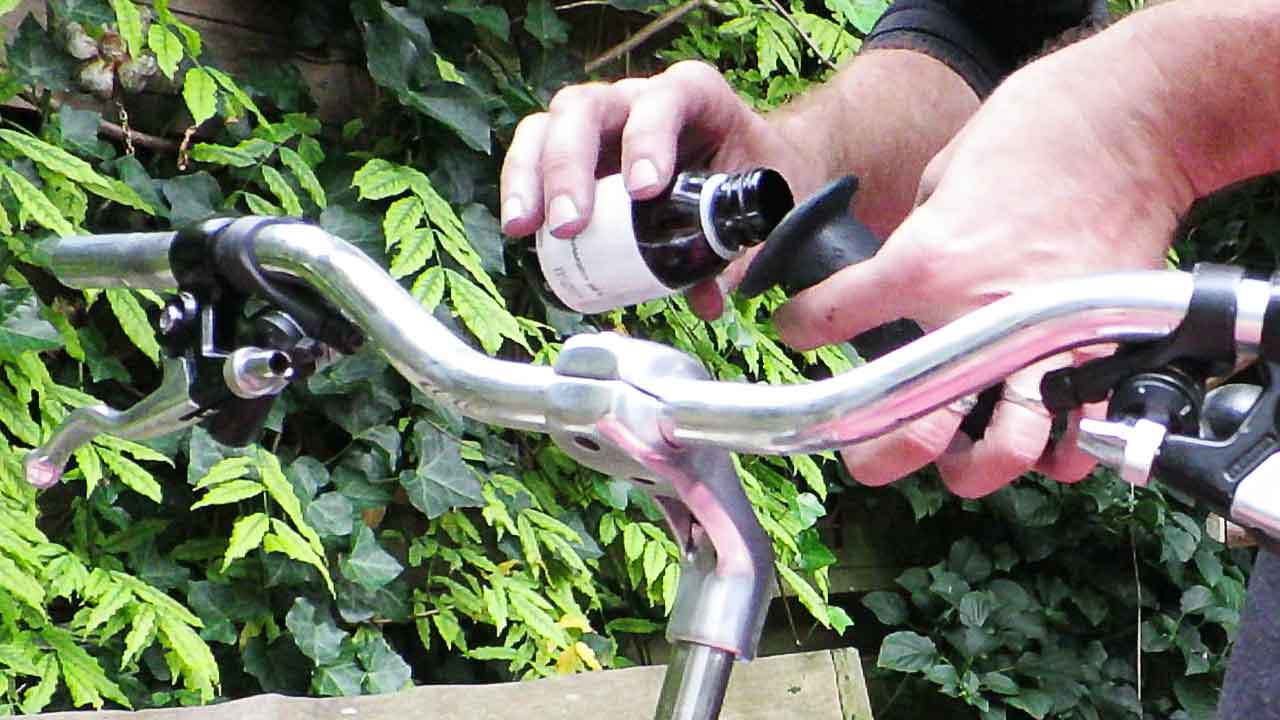 In this short article I’m going to explain how to install rubber handlebar grips. This short bike restoration process can be frustrating if you don’t have the little tip I’m going to provide you here

With enough space on my extended handlebars of my beautiful Koga Miyata Adventure, it is time to install the equally beautiful Tange SK-115 grips.

Since these grips cost me a fortune I want to be sure I get them on quickly and easily without the need to use force to get them into place.

The reason why installing rubber handlebar grips is such a nuisance is because they tend to stick to the steel or aluminium of your handlebars. And the further you slide them on the more they grip the bar.

So you’ll need a lubricant to get them into place. But the caveat of using a specific lubricant is you want the effect to be temporary. If you’ve installed the rubber handlebar grips you don’t want them to keep slipping and sliding.

That’s why you never want to use such a thing as soap or something else which will take ages to either dry, if it will at all.

You also don’t want to use a glue as a lubricant. Although glue will loose its lubricative nature, it’s also glue. So if you do want to move your grips, the process to do so will be significantly harder because you’ve actually glued them into place.

I’ve seen people recommend WD-40, because the solvent in WD-40, which will act as your lubricant here, will evaporate. However after its evaporated there’s still the WD-40 itself to deal with.

And since some people use WD-40 to lube their chain, it is undoubtedly not the best product to easily install rubber handlebar grips and keep them in place.

I’ve seen people use many other ways of installing rubber handlebar grips, but by far the best one is to use rubbing alcohol. I use a 96% variant meaning the fluid contains that percentage of alcohol. Don’t drink it though.

After I’ve put a small amount of the liquid into the grip I shake it so it’ll cover the entire inside of the grip.

Be sure to place your hand on the opening of your grip and be aware of the fact that the part of the grip on the outside of your bar can also contain a hole.

If the inside is covered, sliding the grips onto the handlebars should be a piece of cake. And since rubbing alcohol contains a very high percentage of the stuff, almost all of it will quickly evaporate without any trace.

The alcohol evaporates quickly, but not so fast you won’t have time to adjust the grips.

Don’t these grips just look fantastic! So that’s how you install rubber handlebar grips! If you like this article give it a thumbs up. If you have any questions or suggestions for new articles, let me know in the comments below. Cheers.