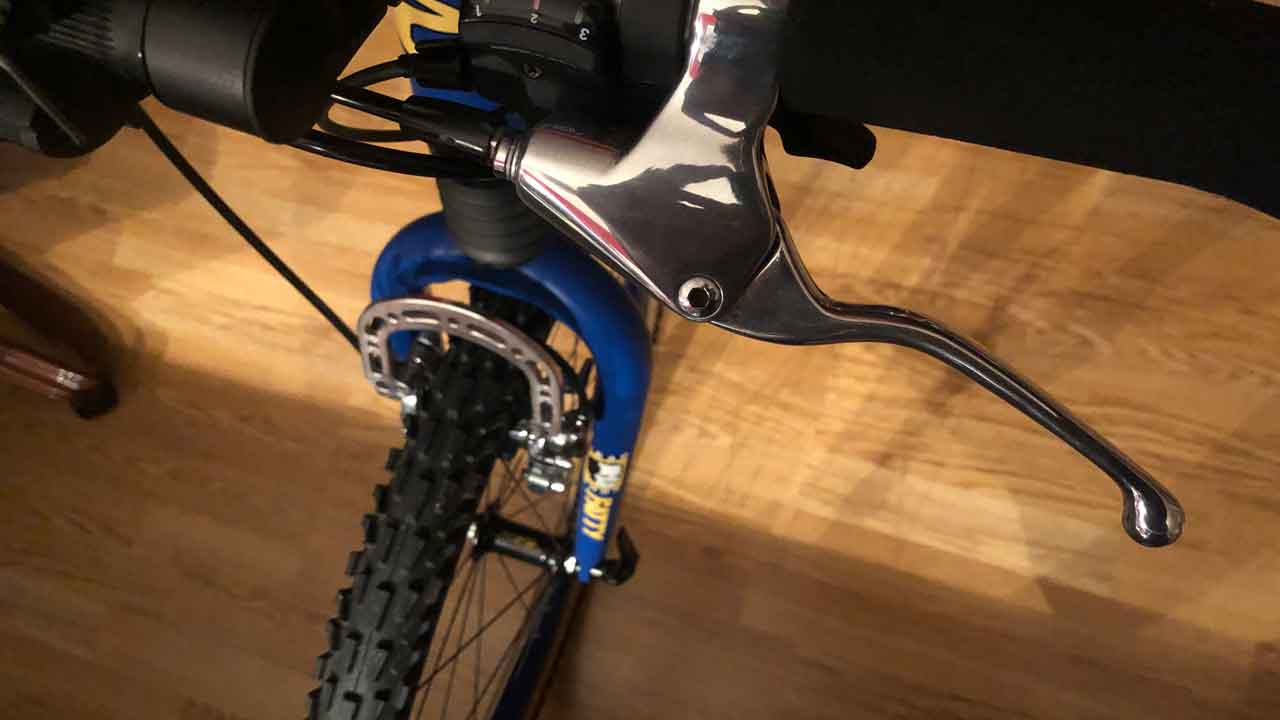 In this article I’m going to show the process involved in restoring a pair of 1995 Magura HS22 brakes.

For as long as the brakes have been on my bike, I have been itching to restore them. Not only were the brake levers and pistons scratched up, the cables were also damaged and too short. And the brakes themselves were in desperate need of a refill and bleed.

I came across CODA XYZ handlebars. And this Cannondale Super V originally came with these handlebars as well. Installing them meant I needed to overhaul the entire cockpit setup. And while I would be at it, it was time to also restore the Magura HS22 brakes.

Polished brakes would look great alongside the polished headset, polished crankset, and silver Thomson seatpost. It would be the end of a restoration journey, and together with a new set of shifters and these cool-looking handlebars, they would be the cherry on top of this awesome build.

Since these are the only hydraulic brakes I own I had none of the tools necessary to perform the bleed. So where I will be doing all the sanding and polishing, I asked Brian for help.

Brian runs his own bike shop called Reefo’s. He specializes in mountain bikes, and he basically knows everything there is to know about suspension. He has done a wonderful job on the Headshok suspension and was kind enough to help me out with these brakes as well.

But before we get to that it’s sanding and polishing time. I sped up my standard polishing process and only go up to a 400 grit wet sanding before letting the polishing wheel do the rest. There’s no difference in the end result.

Since the brakes are not one smooth surface I used a dremel to remove lines left by the aluminium cast. These are places behind which sandpaper has a hard time reaching, which means paint stays in place otherwise.

Sanding and polishing is always a painstaking process, but the end result is also one of the most rewarding. This time it was no different. I had already done the brake levers in an earlier stage, but I believe sanding and polishing these brakes in its entirety took me about 10 hours to complete.

And yes, I also polished every single bolt that came with it as well.

Step 2. Getting the hoses in place

With the sanding and polishing step finished it’s time for Brian to do his magic. But not before we had to reassemble the brakes correctly. I had taken them apart completely for the polishing step and incorrectly reassembled the rear brake.

These mishaps happen from time to time. But since I knew where the hoses needed to go, we found out soon enough.

Unlike brakes that work with cables, hydraulic brakes need to be sealed from the outside world and contain brake fluid.

The brake levers contain two holes each as do the pistons. One hole is to connect the hose to, the other is to enable you to fill the system with brake fluid.

We reused the hoses that connected both pistons and renewed the ones running from one piston to the brake lever. After you’ve cut the hose at the correct length you use a piece of kit on the hose resembling an olive and bearing the same name.

As you tighten the bolt behind the olive, the olive is pressed into the hose, making the entire setup airtight and preventing the hose from moving out of the brake lever.

For these Magura HS22 brakes it wasn’t necessary to use insert pins to stick in to the hoses, or at least Brian decided not to use them.

Brian’s process of bleeding brakes is different from what I’ve seen online. Instead of one syringe he uses two to get the air out of the system. One inserted in the piston, and one in the brake lever.

This makes sense considering the fact it’s always a nuisance to get the bubbles out of a system with so many curves where they can get stuck.

I’ve done a separate video on how to adjust Magura brakes. After the brakes were performing satisfactory, they we’re adjusted as well.

These Magura HS22 brakes look really awesome but adjusting them is annoying and reminds me of setting up cantilever brakes. It took another half hour or so of tinkering before the entire brake setup was completed.

Putting on the handlebar foam with the help of an air compressor finished the entire restoration project.

My thanks goes out to Brian. Suffice to say I couldn’t have done this without him.