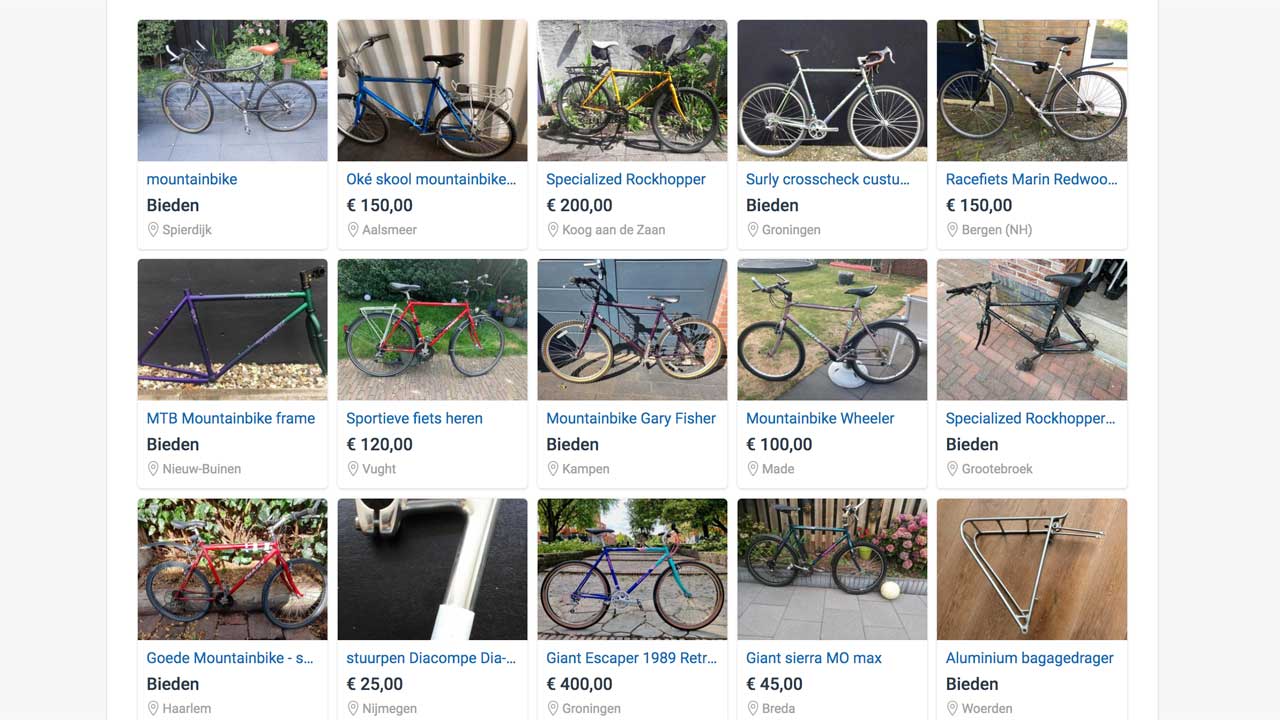 In this article I’m going to cover a number of things so you’ll know what to look for when buying a used mountain bike, my favorite type of bicycle. Although the main focus is on mountain bikes, a lot of things apply for used bikes in general.

I’ve recently finished my Cannondale Scalpel Team Replica from 2007, which turned out to be the hardest restoration I’ve done up to that point. It was the the newest bike I’ve done, the most complex, the most expensive as an initial purchase, and the most expensive from a repair standpoint.

On the other hand, now that I’ve ridden it, all those past troubles are left behind, as I’m able to do things on the trail, I’ve never been able to do before. It even inspired me to write an article about a  Cross Country Mountain Bike Training Plan, just to get better as a rider.

I’ve owned a total of 7 mountain bikes, and fully restored 6 of them. And they are all pretty old. From my Koga Miyata Skyrunner Carbolite, to the Super V and Killer V, and now my Scalpel.

None of those bikes worked, and they didn’t work at all. From sticky shifters, damaged suspension, incorrectly installed derailleurs, torn rims, creaking bottom brackets, worn dropouts, they basically needed a lot of work.

And after the Scalpel debacle, where the repair costs outran the already expensive initial purchase price, I’ve now simply stopped expecting a used mountain bike to work, and keep a worst-case scenario in mind.

Finding my first mountain bike, which was broken and tossed aside, led me want to learn more about bicycle repair than being able to fix a flat tire (which is very useful as well).

If I hadn’t learned those skills, I would argue that actually restoring these used mountain bikes would be nigh impossible. I’ve had multiple LBS help me out many times, but those guys will not totally fix and/or restore a (very old) mountain bike for you. That’s not their job.

And even if they would, their hourly rate would bankrupt you in the process. Getting a bike in pristine order, maybe even better than it originally was, and keeping it that way, takes many, many painstaking hours.

For example, the Cannondale Killer V, had its entire drivetrain restomodded into a 9-speed touring/road racing amalgam. A huge number of compatibility issues started to arise when I did that. There’s not a single original component left in there, and it took hours of research and tinkering to get it to suit my special requirements.

3. Support your LBS (you’re going to need them)

I happen to have a good relationship with the owner of the LBS before I decided it was a good thing to start restoring bikes. And because of it he and his colleagues have helped me out multiple times with solid advice and some handiwork.

The owner has been in the business for 25 years and has seen about everything there is to be seen when it comes to bike repairs. Furthermore, he has an innate talent for seeing solutions I wouldn’t have come up with for a million years, and the ease with which he uses a hammer on one of my precious bikes is as admirable as it is gut-wrenching.

On my last project, a total of three different bike mechanics worked. They didn’t do that for free, but let’s just say they took the time necessary and sometimes didn’t charge me for it.

And the reason they do that is because I that I always voiced a willingness to pay for what was their job, and brought occasional six-pack. Maybe there are some a-holes out there calling themselves bike mechanics, but in general, they are more than willing to help you out. And I know for sure you’re going to need them, sooner rather than later.

4. Know what issues to look for when buying a used mountain bike

Knowing that the average second-hand mountain bike you’re planning to purchase is not going to be in pristine condition, doesn’t mean you’re looking for a project that’s going to bleed you dry financially.

To at least lower the risk of having to remortgage your house for your new hobby, it’s a good thing to get a feel for what type of repairs you’re going to be facing after the bike has changed owners. So here’s a table of mountain bike parts and what’s usually wrong with them. I’ve experienced all of the issues listed here. I won’t list parts that we’re swapped with non-original ones.

Of all these things the most important is the state of the frame and suspension (if applicable). They are by far the most difficult and costly to repair and/or replace.

In general the suspension on old mountain bikes will be in bad condition, and the average amateur restorer won’t know how to fix them. The thing that gobbled up the majority of a project’s budget, apart from maybe the initial purchase of the entire bike, was paying a professional to service a badly neglected suspension.

5. Don’t be afraid to ask questions

I’ve learned the hard way to ask questions before I pull my wallet. I aks for closeups of the frame, ask for a service history of the suspension, and ask an open question about the possibility of hidden issues, assuming the seller is nothing else but an honest person. And I do that before I make an offer.

I don’t send them the above checklist, because people are not used to such a thing which won’t work in your favor. And I’m not afraid to walk away from a listing so to speak, if something feels off.

I’ve had a single instance where somebody was unwilling to answer my questions about the bicycle’s history, citing the bike was “vintage”, and that I could see the state of it in person. Yeah, that’s not going to cut it for me.

I understand this post might feel a bit overwhelming, and to be honest, it is kind of exhaustive and might discourage you from buying a used mountain bike. But that might not necessarily be a bad thing.

Maybe you’re better of buying a new one, complete with a year of free service and a lifetime guarantee on the frame (if you’re lucky).

But if you do decide to go down the rabbit hole, I’ve at least done my best to prepare you for the rollercoaster ride that’s about to begin.