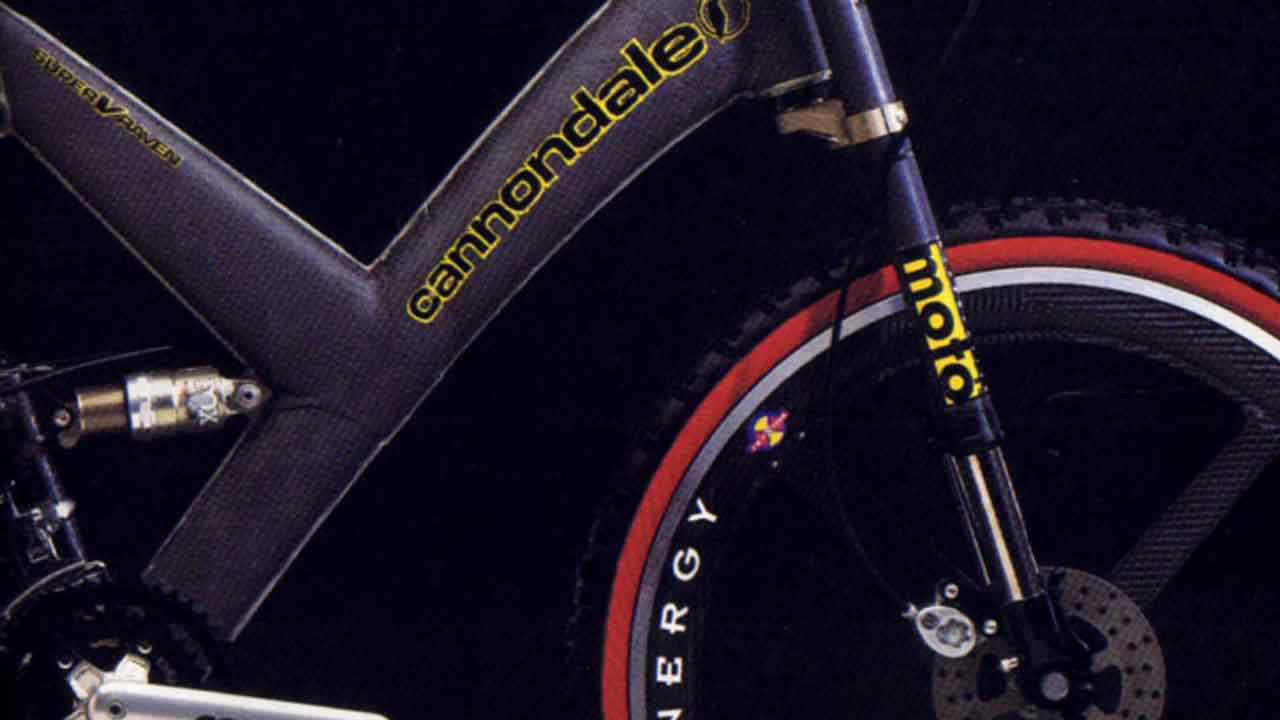 In this article I’m going to discuss a couple of the coolest vintage Cannondale mountain bikes you could turn your eye to for your next retro build.

I since have bought and restored a Cannondale Super V and am in the process of pimping a Cannondale Killer V.

One of the reasons I got my hands on a Cannondale is that they are very omnipresent. I’ve seen a lot of videos detailing brands like GT, Kona, Marin and the like, but has never seen a vintage mountain bike of those brands on my local marketplace. I guess they just didn’t sell very well over here.

I remember Giant was omnipresent when I grew up, but if you owned a Cannondale you we’re king of the hill. And when you’re a teenager those bikes are so out of reach. My brother bought a Giant in the mid 90s for around 700 Dutch guilders, which is roughly 400 USD. And that was a lot of money for the time, let alone splashing thousands of dollars for a more premium bike.

Compare that today when people are dumping their bikes on marketplaces as fast as they can. For those of us who like those MTB’s from the 90s it’s a great time to be living in. Those bike that you thought you’d never have, can be had for a fraction of the cost.

I’ve written down all the Cannondale bicycles in my article about Cannondale catalogs. And because I did and actually have owned 3 of them (I sold my M300) I’m in a solid position to convey some of the coolest vintage Cannondale mountain bikes you could pick for your next retro build.

Every company has to start somewhere, and for Cannondale the start of their foray into mountain bikes started in 1984 with the SM-500. For $595 ($1491 inflation-adjusted for 2020) you could call yourself the proud owner of a mountain bike. I believe the “SM” stands for “Sport Mountain”

It was only the second year they made bicycles, and only one of two in their entire lineup that year. How things have changed. But the bike in its original state has some beautiful components in first-gen Deore XT thumbshifters for a six-speed rear derailleur.

Suntour and Sakae were also still in the game and represented on this bike. And putting a Brooks sadle with springs on a mountain bike was still normal.

And although Cannondale would pioneer the evolution in high-quality aluminium frames, this one is obviously steel.

If you’re looking for a true vintage Cannondale mountain bikes, it literally doesn’t get more vintage than this one.

It’s extremely hard to find a complete first edition, but when you do… call me 🙂

Cannondale Beast from the East

When the mountain bike movement started to really take off in the mid eighties, suspension was still a thing of the future. And the rigid MTB has been a staple of many brands deep into the nineties. And Cannondale’s Beast of the East is the best of the lot.

Basically the Beast of the East is a high-end version in Cannondale’s SM-range (which turned into the M-range after 1991), with the SM800 from 1987 being the first one and the last one being made in 1998. The frame distinguishes itself from the normal SM-range frames by having its bottom bracket placed higher to have more clearance.

As far as vintage Cannondale mountain bikes go, the Beast of the East is an absolute classic. But are you man enough to ride a hotpink mountain bike?

The year was 1993 and it was time to lauch a full-suspension bike onto the unsuspecting world. And Cannondale did so with the Super V 3000.

Can you imagine being familiar with a standard frame setup and being confronted with the out-of-this-world geometry of the Super V. And that in era where Kurt Cobain was still alive and I had to pay for the thing in Nederlandse Guldens, which is the now defunct Dutch currency?

That’s a lot of money for someone who was 12 years old at the time. I would have forgo school to work full-time in a shed for over 2 years to pay for the thing (which was probably worth it).

The frame was such a departure from the standard frames we were used to that you either hated or loved it. There was no in between. But you had 2 inches of travel in the front and a “whopping” 3 in the back. If that doesn’t make you smile you don’t have a heart if you ask me.

I prefer the 1995 Super V 2000, the first year they introduced one with a carbon rear swingarm instead of an aluminium one, and the one-piece CODA 501M crankset.

In later iterations they would change the shape of the massive rear swingarm in more conventional tubing. Undoubtedly this would improve stiffness and robustness of the frame, but it did detract from the iconic look of the first iterations.

The black frame with yellow decals of the 1998 Cannondale Killer V 900 HT was the first Killer V model to sport front suspension out-of-the-box.

The Killer V is the more aggressive version of the Delta V, which makes it look better. And the front suspension makes for an awesome retro trail bike. The frame, although looking heavy because of it’s oversized tubing and interesting front section, is actually pretty light and incredibly stiff.

Everybody who loves vintage Cannondale mountain bikes knows about the Super V DHF from 1998. Just as the initial Super V turned heads in 1993, they would again with this beast of a machine.

1997 had already given us the Super V 4000 DH and Super V 4000 X with respectively 160mm. and 100mm. suspension, but in terms of awesomeness it’s the DHF that’s remembered for stealing the show.

It was a typical example of when the R&D department overextends itself, but by golly it really looked like it could eat mountains for breakfast. But the thing came and went just as fast. Even now I’m wondering if you could actually buy the bike and how many of them were even made. It would be interesting to learn its MSRP value.

I won’t even try to explain how the drivetrain works. You can look at the video for that. Suffice to say that as far as collectibility goes this thing is way up there and will definitely never be had for your next retro build.

If you try hard enough and look long enough you can probably get any of the other bikes for a reasonable price. That’s not the case for this one, for I haven’t found a single sold listing on Ebay. But it’s a piece of history and that’s why it’s on the list I guess.

As the millenium drew to a close and the magical golden decade of mountain bike innovation would end Cannondale would offer the Freeride 2000 version of their Super Raven model.

I always favored the Super V over the Super Raven. Maybe because they simply weren’t ridden in the top competition as far as I can recall. And maybe because it didn’t look retro enough for me anymore.

But this version has CODA disc brakes, a Headshok Moto FR fork with 100mm. of travel and riser bars.

Yes indeed, I would very much like to take this bike for a XC spin, thank you very much.

And that’s it for my list of coolest vintage Cannondale mountain bikes. Hope you liked it.