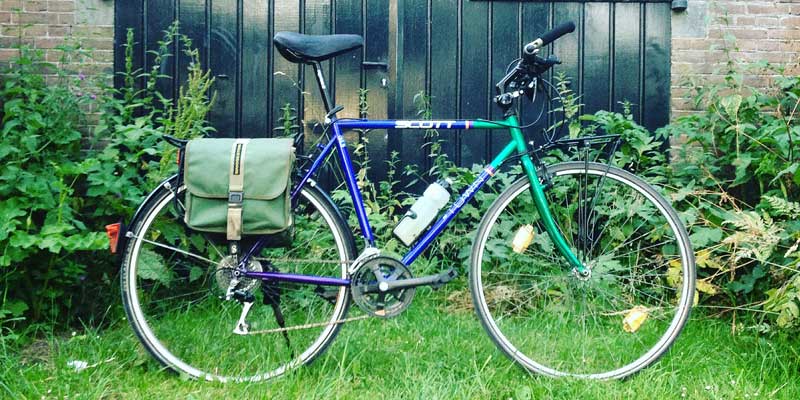 When I was in my early twenties I went on bike holidays with my friends. I used my dad’s old road bike for this purpose, which was less than perfect. It was pretty uncomfortable and with just a luggage rack clamped to your seat post, you couldn’t take much with you. It was the second bike I restored from basically being non-rideable. It was also the first bike where I decided than rather to pay a bike mechanic to do the work for me, to pay for the tools to do it myself. In the end that mindset turned this 1990 Scott Town XC into the grand tourer I always wanted.

The wheels had different rims. The derailleur hanger was also bent. And the frame is slightly out of alignment, so it was probably in an accident. I changed both wheels into a matching pair with black Alesa 6021 rims from a Gazelle Golvo donor bike.

The Scott has the worst brakes on any bike I currently own. Not only are they center pull, but they are worn as well. Adjustment, already a pain with these type of brakes, is made worse with the adjustment screws being on only one of the brake arms. But I rather stay true to the original bike than to upgrade them, unless I had an extra pair made in the same year.

A scary downslope ride in Paris made me conscious of the fact I definitely needed to replace the brake shoes.

The rear derailleur hanger was bent inwards, causing it to catch the spokes in the lowest gear. It is a steel frame, so I knew it could be bent back. I was anxious to do this myself. So along with some other repairs, I let my LBS handle this job.

The 200 GS crankset was totally worn and welded together. This forced me to replace the entire thing. On Ebay I found the nicer looking 300LX Biopace version for £13. It was an upgrade from the same year for a good price. At least, that’s what I thought at the time.

Worn as expected. I first replaced the chain, but it slipped frequently. This was over as soon as the cassette was new as well. I have since not been able to replace a chain on an old cassette without frequent slippage.

The bike only had a rear plastic mud guard. I added an alloy one from the Golvo to the front, after spraying it black. I simply sprayed over the rust and the alloy doesn’t quite mix with the plastic version in the back. So I’ll probably replace it sooner or later. But it does keep my toes dry when riding in wet conditions.

It also added an extra inch to the tires, so now I have to lookout when turning to not bump into my feet. More evidence the bike is too small for me.

Sometimes you’re lucky. With me I seem to have lucked out with the lighting. I only needed to attach the very tiny cables to the rear wheel dynamo and it worked. The fact that the lighting cables weren’t broken on a bike this bad is nothing short of a miracle.

Day 174: #maidenvoyage on restored #scott Town XC. Hadn’t heard that familiar buzzing sound of a wheel dynamo for probably 20 years. Ripped through #amsterdam with a smile on my face. #bicyclerestoration #trashfind #safetyfirst

The bike originally only had a rear bike rack, which had very thin bars. I thought it was ugly looking, and all the rust only made it worse. I asked my brother if I could use his bike rack from a 90s Giant X 2000. The thing was unused and like new. and with much thicker and nicer-looking alloy bars.

I also added an Agu Sport front rack, after spraying it black to match the overall look-and-feel of the color scheme.

I found a beautiful 70s green canvas Bridgestone bike bag. I added plywood bottoms to keep the bags in shape when adding some weight to them. They tend to sag otherwise, which just looks ugly.

I also had a ToPeak saddle bag on my dad’s old road bike from the early 2000s. Considering I don’t ride that bike any more it found its way onto this bike.

The suede leather saddle turned out to be a Selle Italia Criterium. The brand was just barely visible and almost worn away. It seems the saddle is from the 70s. Considering the bike itself is much younger (relatively), it makes me wonder who the original owner or owners were.

The leather itself had multiple deep gouges lengthwise about 5 inches long. I had it repaired by a shoemaker, who put a piece of leather underneath it and glued it together again. He was very hesitant at first to do it, but came up with this solution himself. At €30 for the repair and the black paint job, it was definitely not cheap, which made me realize that with a bit of resourcefulness I could’ve come up with the same solution myself.

The saddle itself, though still pretty ugly, is very comfortable. So I don’t really regret the decision to repair it.

I’m 6.4ft or 1.95m and this bike is too small for me. I’m used riding on smaller bikes because I started riding on my father’s road bike and he was shorter than me. Just I had to use another seatpost on that bike I also needed a longer one on this one. I went for a cheap Ergotec one. It does the job.

I added the necessary stuff to be able to mount my smartphone. Since I’m kind of OCD and want my phone to be in te middle I added a Bar Fly Universal Mount. On this mount goes another one: a LifeProof Bar Mount.

With small velcro strips I lead a Belkin Duratek USB cable from this mount to the rear bag underneath the top tube. This way I’m able to power my iPhone with a small 3000mAh Fresh ‘n Rebel powerbank and not have to worry about the battery running out. For my iPhone X it’s good for a single charge.

The first bike where I set out to do as much myself as I could. I learned a great deal getting all the repairs done. And the bike has served me well since then. Knowing how to service bottom brackets, changing cassettes and chains, tightening headsets and doing it with specialty tools. And it was also the bike which made me make the mistakes you need to learn using spray cans.

It’s the most well-rounded bike I have. It even has a stand and a ring lock. And the bike bags have let me use it to commute for overnight stays without needing to wear a back pack. The saddle bag can hold my repair kit and straps for hauling more stuff onto the rear rack than can fit in the bags. From simply getting me from A to B, doing groceries and getting in a workout, it has become my go-to work horse.