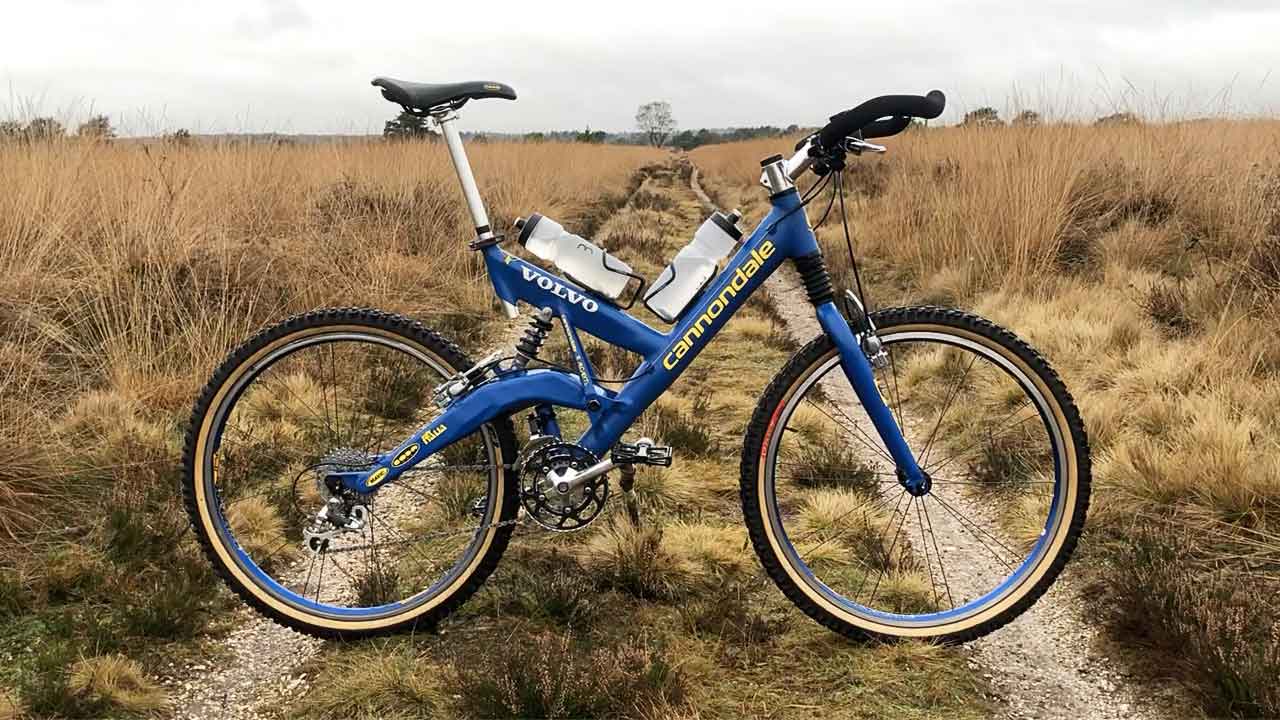 This is my Cannondale Super V and to me it’s a special bike indeed. It’s the typical story of the bike you wanted as a kid but was unable to afford at the time. Adjusted for inflation you’d pay around $4000 dollars today.

It was sitting at my local thrift store totally wrecked. It was obvious it had been sitting outside, which is a death knell for any bike.

I decided there and then than no matter what, I would get it back up and running again. What I lacked in skills at the time I would make up in patience and persistence.

Cannondale started selling bicycles in 1984, with the Cannondale ST-300, with ST standing for “sport touring”.

After this first bike they quickly expanded their lineup and established themselves as a high-quality provider of both racing- and mountain bikes. And they we’re one of the first selling bicycles specifically designed for off-road use.

The 90s are generally considered the golden age of mountain biking. A lot of companies, Cannondale included, came up with great innovations and great-looking frames. It is in this era that Cannondale’s Volvo Racing team achieved many successes establishing Cannondale as a pioneer and innovator in the mountain bike industry.

If you ask me, they’ve since lost that iconic status. And a great era in cycling ended when they were the last big manufacturer of bicycles to move their operations overseas and away from the US.

The Cannondale Super V ran from 1993 to 2002. This one from 1994 is part of the first generation of Super V’s, which is characterized by having a massive aluminium rear swingarm.

It might not seem like it now, but in the early nineties, apart from the fact that full suspension mountain bikes were anything but common place, the unique-looking frame of the Super V was truly otherworldly and awe-inspiring compared to other bikes on the market. Especially for a thirteen-year old like me at the time.

In the end I either repaired, restored or replaced each and every single part that’s on this bike.

The biggest project was hand-sanding the entire frame, spraying it in the Cannondale blue and yellow team colors of the late nineties, and applying a fresh set of decals.

The front suspension is a Headshok Fatty D with 60mm. of travel from 1998. It started leaking oil and was totally rebuild.

The Fox Vanilla coil damper, with 2 inch of travel, was still working fine after more than two-and-a-half decades.

While working on the bike I came across unique-looking CODA XYZ Superlight bullhorn handlebars. They only came out in 1994, the same year as the bike. These type of handlebars were very short lived and are pretty rare indeed. But to me it definitely adds a certain uniqueness to this build.

I had to replace the grip shifts because they couldn’t get past the curve of the handlebars. I swapped them out for NOS Shimano 3×8-speed Deore XT trigger shifters, which are also from 1994.

The gray and black paint of the Magura HS22 hydraulic rim brakes was badly scratched up and flaking. I sanded the brake levers, pistons and clamps, after which the brakes received new hoses and were properly bled.

I renewed the entire drivetrain, replacing the cassette, chain, chainrings and bottom bracket. I sanded and polished the original Deore XT crankset.

The bike runs a period-correct Deore XT derailleur in the back and an LX in the front.

One of the very few modern day upgrades are the Deity TMac flat pedals. I’m a purist at heart and try to achieve that original feel as much as possible, but one thing you won’t see me doing is running caged pedals.

One other modern day component is the gorgeously machined silver Thomson Elite seatpost. Atop it sits a CODA 1000 saddle.

The bike had two different wheels with different tires. I threw them out and replaced them with blue anodized Rolf Dolomite wheels from 1999.

Where a normal wheel would traditionally feature 36 spokes, the Rolf Dolomite wheels would feature 24 spokes front and back. This was a revolutionary technology at the time.

The rims feature Panaracer Smoke and Dart 2.1″ tires. This is a beautiful reissue of the Smoke and Dart from the nineties. And the fact that these tires come in a true skinwall version make them a very obvious choice for any mountain bike restoration project.

Restoring a bike taps into the notion and necessity of being able to create rather than consume. There’s something extremely rewarding about fixing a bike that somebody else left for dead.

Besides the skills necessary to perform all the repairs, it also involves a certain dogged determination and perseverance for someone like me, who’s far from being an experienced bike mechanic.

But the greater is the joy of being able to experience all that hard work, knowing you have preserved a piece of mountain bike history.