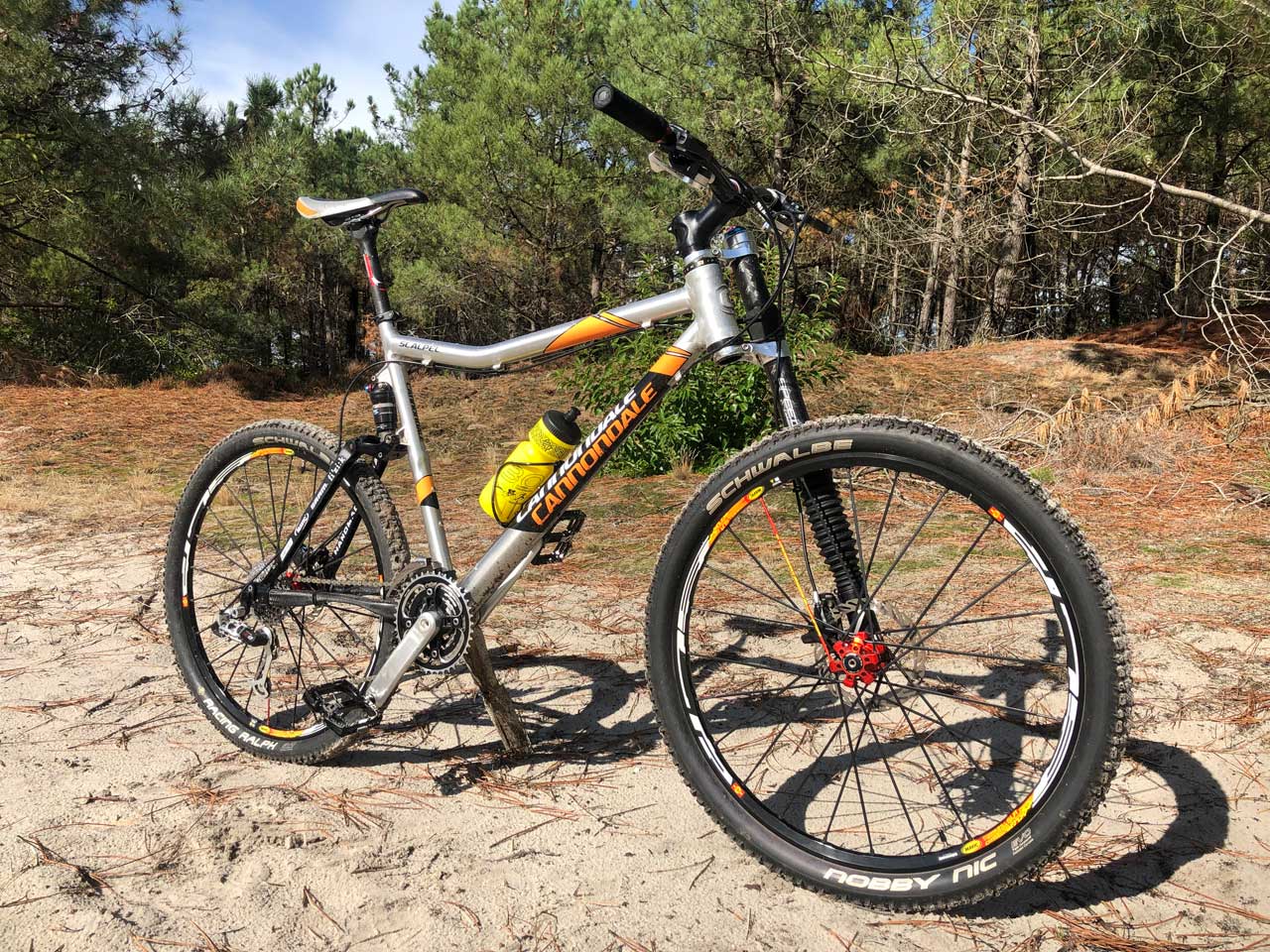 I have an interesting relationship with the bikes I own, and this one is no exception. It’s a Cannondale Scalpel Team Replica from 2007, and it’s the top-of-the-line cross-country mountain bike of that particular year.

It was the bike that helped Fredrik Kessiakoff win his first and only World Cup, so it definitely has been race-proven, even if for today’s standards, the 26 inch wheels and the riser bars width of 66 centimeters might look terribly outdated.

So why buy this bike? While for the majority of people this mountain bike of 15 years is very old, when compared to my other full-suspension bike, the Cannondale Super V from 1994, it’s extremely new. And believe it or not, it’s the first bike I own that has disc brakes.

And this is a truly gorgeous bike, the pinnacle of what the crazy engineers at Cannondale could come up with, and still proudly bearing the “made in the USA” decal, 3 years before the close of the last assembly plant in the United States.

It’s the last high-end aluminium frame before every new iteration would be made of carbon. So that makes for an interesting mix of an aluminium triangle, with carbon chain stays, and composite seat stays.

The carbon chain stays don’t have pivot points but are meant to flex on their own when compressed, with the shape of the carbon offering fantastic up-and-down flex and amazing side-to-side stiffness. A piece of technology which is still used in today’s Scalpel and is mind-boggling just thinking about it.

This iteration of the Scalpel feature the red-and-black Mavic Crossmax SLR that are part of my list of the best vintage mountain bike wheels money can buy, and are wheels I consider to be the most beautiful cross-country ones ever made.

An aggressive XC tire setup, comprised of a 2.25 inch width Schwalbe Nobby Nic up front, and 2.1 inch width Racing Ralph in the back sounds about what I would do with this bike. They replaced the original Maxxis Larsen TT dual setup, which was faster but less grippy.

The most distinguishable trait of the bike is obviously the front suspension, which is the Cannondale Lefty Speed Carbon SL with 110 milimeters of travel. It’s a hate-it-or-love-it piece of tech, but it’s ride quality is undeniable. It’s accompanied by an incredibly short 140mm Fox Float RP23 shock in the rear.

The rest of the bike is decked out according to its racing pedigree, with carbon parts everywhere. Avid Juicy Ultimate brakes sit atop SRAM X0 shifters powering a 9-speed setup with a triple crankset. While the rear derailleur is the SRAM X0 version, the front derailleur is a Shimano XTR.

The BB30 bottom bracket with ceramic bearings, which was still proprietary to Cannondale bikes in 2007, holds their Hollogram Si crankset and FSA chainrings. The Crankbrothers Eggbeater pedals with their 4-way entry are perfect for the entire feel of the bike.

Furthermore the Fizik Wing Flex saddle in team colors is held by an FSA Carbon K-Force Lite seatpost. Steering this beauty is done with the help of Bontrager Race X Lite. I think a heavy crash with this bike ruined the original FSA K-Force XC riser bars and grips, and the Bontrager was the replacement.

This bike was one of six bikes that were sold, all very premium Cannondale models. Among them was a Raven, Scalpel, F2000, F4000, and a Super V. As it turned out the previous owner had passed away, and he left this collection for his friend, to sell and find new owners.

The seller wasn’t much older than I am, so I can only assume his friend passed away way too early. And he mentioned he had said to him that for this Scalpel someone special would come. Somebody who knew how to appreciate the bike. And as he said that I conveyed that I suspected that such a thing as the passing of his friend might be the case of this distinctive sell-off of bikes.

It felt like a déjà vu, and if this was somehow supposed to happen to me. That his friend had been right. I had the exact same experience with the Koga Miyata Skyrunner Carbolite. A premium bike that was an inheritance, meant for somebody who could appreciate and restore it to its former glory.

Of course, I don’t know if this is true, but you have to admit it’s a great backstory to this wonderful piece of machinery. The bike you’re looking at definitely needed some love, and I spend an amount of money which was more than the initial price on original and new parts to get it being as race-ready as it was back in 2007.

Truth be told, that was a lot of money, but a small price to pay for what I now get in return. In the end, we all know that money is nothing, it’s what you do with it during the course of your life that matters. And I think that the previous owner of this bike would agree with me. So I salute him and thank him, for I’m grateful that I get to pick up where he left off.

This would be the hardest restoration I’ve ever done. 4 months to bring this Cannondale Scalpel Team Replica from 2007 back to life. Multiple people helped me out (and got paid for it) because I simply lacked the knowledge and parts to fix both fork and shock which were totally worn, leaking and torn.

I’ve never had so much mixed feelings about a bike during the restoration process, because I felt out of my depth and multiple times doubted if the thing would ever ride again. Each time, new exotic and devastating issues would arise and I performed many repairs I’ve never done before.

In the end I was determined to get the thing riding again, so put my emotions aside, rolled up my sleeves and dug deep into my wallet when somebody more experienced than me had to roll up theirs.

The result was a thrilling, epic first ride. The trail gods smiled down upon me and laid down the best local singletrack I’ve ever ridden to test this beauty. Mission accomplished! 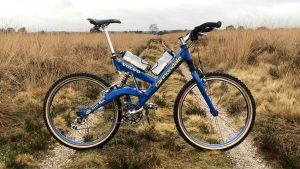 This is my Cannondale Super V and to me it’s a special bike indeed. It’s the typical story of the bike you wanted as a 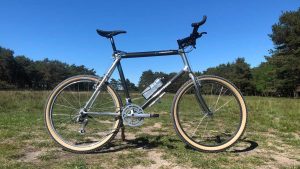 I’d been looking for a Koga Miyata mountain bike for about 9 months before this one popped up on my local craigslist. It’s a 1991 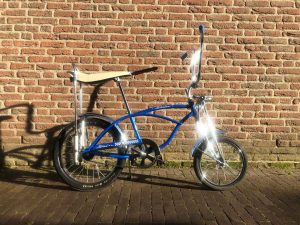 I owned a Vans Schwinnn Stingray Krate Bike. I came across this bike in a clothing store which probably sold Vans as well. It was 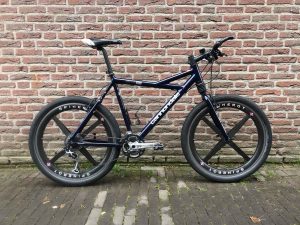 I bought this Cannondale Killer V on a whim. My home was already overflowing with bicycles and bike parts and I really didn’t need any 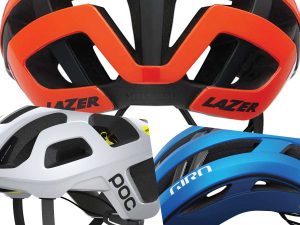 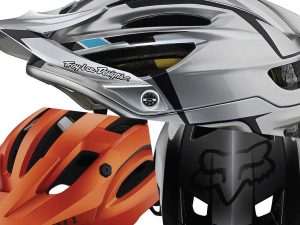 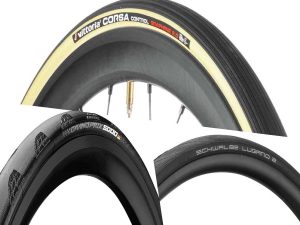 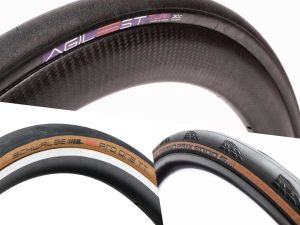 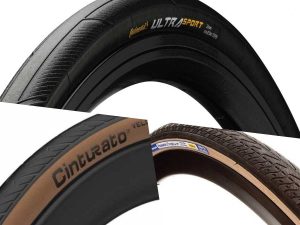 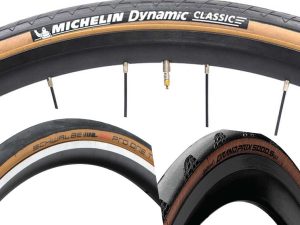