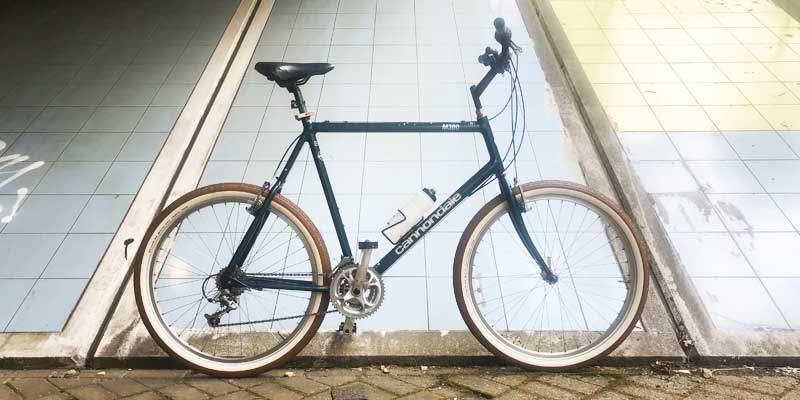 At just $455 ($716 inflation-adjusted for 2020) the Cannondale M300 was the cheapest non-suspended mountain bike of 1998. It needed a lot of TLC before it again achieved its flawless riding nature it has today. After the first night inside the house it also turned out to be the home of various kinds of insects. Ants, beetles, and ladybugs.

Everything that could rust, had rusted. Water had seeped into the rear hub and corroded one of the cones and all of the bearings. An LBS helped finding the correct cone and bearings.

Water had also entered the frame, completely welding the bottom bracket into the frame with rust. It was an absolute nightmare and the biggest issue I had with this bike. It took 3 feet of extra pipe on my big adjustable wrench to get it to finally move, laying on the ground, a small table on top of the frame to keep it steady, pulling with all my might.

None of the brakes worked. Cables we’re broken and all cantilevers we’re seized with corrosion. After I fixed them and put in new brake cables, they turned out to probably be the best brakes on any bike I own. I can easily get my rear wheel of the ground by braking with my front-brake. Who knew these type of brakes, coming from a place of being totally destroyed, would turn out so well?

The derailleur cables we’re fitted wrongly and crossed each other underneath the lower frame tube. The metal on the front derailleur was one unrecognisable clump of orange. I soaked it in vinegar for four days before trying to get to move it again. It did.

It had two flats and and a torn sidewall (the other would tear a couple months later). I actually tried to fix the tear with glue, which worked for a while, until the other tire gave out. I replaced both with Schwalbe Fat Franks

The handlebar and stem we’re black, but severely faded and scratched. They received a new paint job with a spray can. Note to self: even though it says on the can it doesn’t have to, use primer the next time.

The original crankset was completely worn. I received a fantastic Shimano Nexave replacement from a 1994 Gazelle Golvo donor bike with a broken frame. The choice for a bigger chainrings is a logical one considering the fact I do most of my riding in the city and didn’t want to run out of gears.

Obviously the chain and cassette we’re worn as well and we’re replaced with a KMC X8 and Shimano 7-speed cassette.

This bike taught me that you can repair basically anything that’s rusted. Even if it’s totally seized. I didn’t have rust remover at the time so it was a lot of tin foil and vinegar. But as soon as I got things moving a little, whether it was the front derailleur or one of the v-brakes, WD-40 did the rest.

All in all it’s a fantastic bike and an absolute joy to ride through the city. And the combination of the Fat Frank whitewalls with the “Emerald Green Pearl” paint have turned it into a vintage beauty if you ask me. What do you think? Let me know in the comment section below, and if you have any questions, please ask.