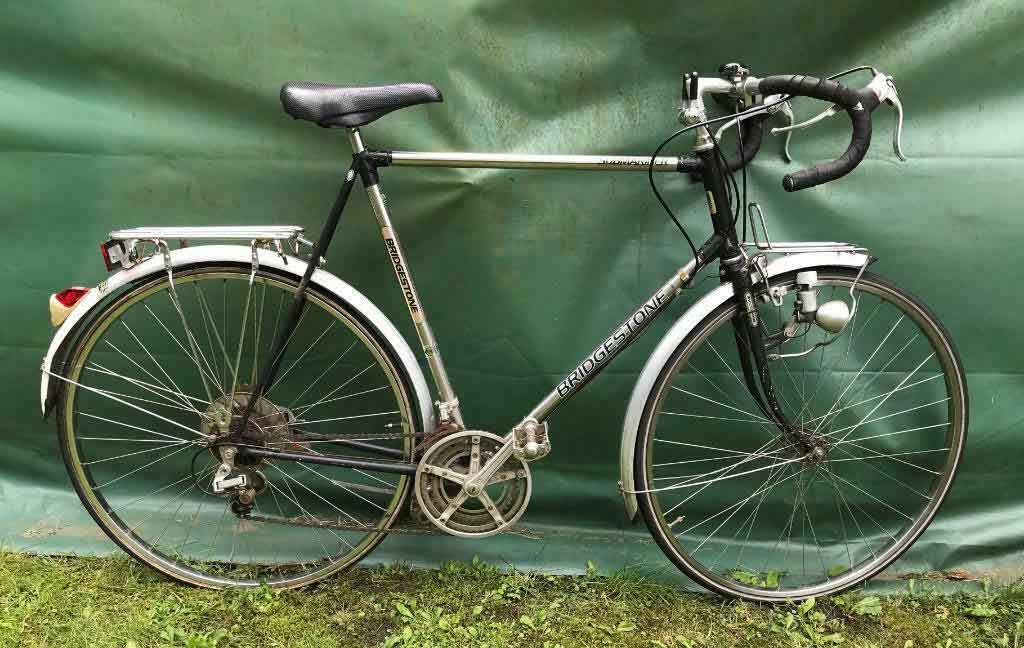 My next project will be a Bridgestone Submariner from 1978. I bought it through Marktplaats from its first owner because it had a number of standout elements and the price was around what I was looking for. Besides I needed a fresh project to be able to create more bike restoration content.

It was one of two Submariners being sold on Marktplaats. I only saw the second one after I already bought this one.

That one looked to be in better shape but it didn’t have the original headlight, which is one of its appealing features.

First look at the Bridgestone Submariner; what did I get myself into this time?

The bike was in worse condition than I had hoped, and only in real life could I clearly see all the damage.

The only parts that we’re really broken are the pedals and the protection at the rear fender. The pedals have two different sides. The bottom side of each pedal is extended to accommodate reflectors. But these extensions have been bent inward, probably because of the force of the foot when pedalling on this wrong side.

Rust has also done its job. But apart from damaging chrome bolts, this can be removed. I’m more worried about seized bolts. Particularly the bottom bracket. It’s old and doesn’t provide much hold to remove the fixed cup.

Considering the amount of rust on the bike, I hope the hubs didn’t suffer too much. Both the rims and spokes are stainless steel and can be polished to a mirror shine. So it would be an absolute bummer if the bearing races of the hubs would show signs of corrosion.

The thing I won’t be able to repair are the damaged decals. This is always a thing with bike restorations. On rare occasions, replacement decals can be bought, but not for this bicycle.

The pain is faded and chipped. I’ll probably redo the black part, while trying to preserve the decals by masking them. I’ve never done this procedure before (I did redo the paint job on my Cannondale Super V), so that’s going to be interesting. I’ve already been looking into options to do a version with Keirin clear coat.

The front tire held some air, but the rear one was shot beyond repair and flat as well. Tires can be quite expensive but are one of the key elements beside the paint job to add some luster to your vintage bike. And I’m considering Continental Gator Hardshell tires over the more traditional gumwall tires. They have darker almost purple sidewalls, which I think will go well with the premium look-and-feel of this bike.

The drivetrain features a fantastic-looking Suntour Seven rear derailleurs. It’s from the era were Suntour reigned supreme in their industry, and the heavy-duty derailleur looks amazing.

The chain is very worn. I’m hoping I’ll only need to replace it with a KMC B1 Narrow Silver 5-speed new chain. But sofar I’ve never been lucky with only replacing a chain and not the cassette.

I feel the seventies feature some of the best-looking cranksets and I also like the one on this bike. When I’ve cleaned and polished it it will have regained its proper splendour.

The fantastic-looking front light is working. The back one isn’t. I’m hoping is nothing more than a simple broken cable issue.

The handlebars have some fine engravings you don’t see because of the muc on top of it. One of the brake levers is also bent inwards and the bar tape is shot as well. I’ve been researching bar tape options but haven’t made up my mind yet. Though these woven leather bar wraps look amazing, their price definitely does not.

I will also replace all cables and cable housings. They’re either bent, broken or both.

This rear brake poses a big risk with this restoration project. It’s an old Dynex drum brake and I have no idea if I can increase its braking power from what it currently is. Which is next to nothing, possibly due to glazing of the internal brake shoes. Right now I don’t even know if disassembling a drum brake is a good idea. Definitely a subject I’ll need to investigate further.

Strangely enough Bridgestone decided to paint the hub shell of the drum brake red. An interesting choice. I also have no idea what the decal with the two arrows must represent. Maybe its the brake in action with a brake shoe pressing against the shell. It has a huge rotor fan to dissipate heat from braking.