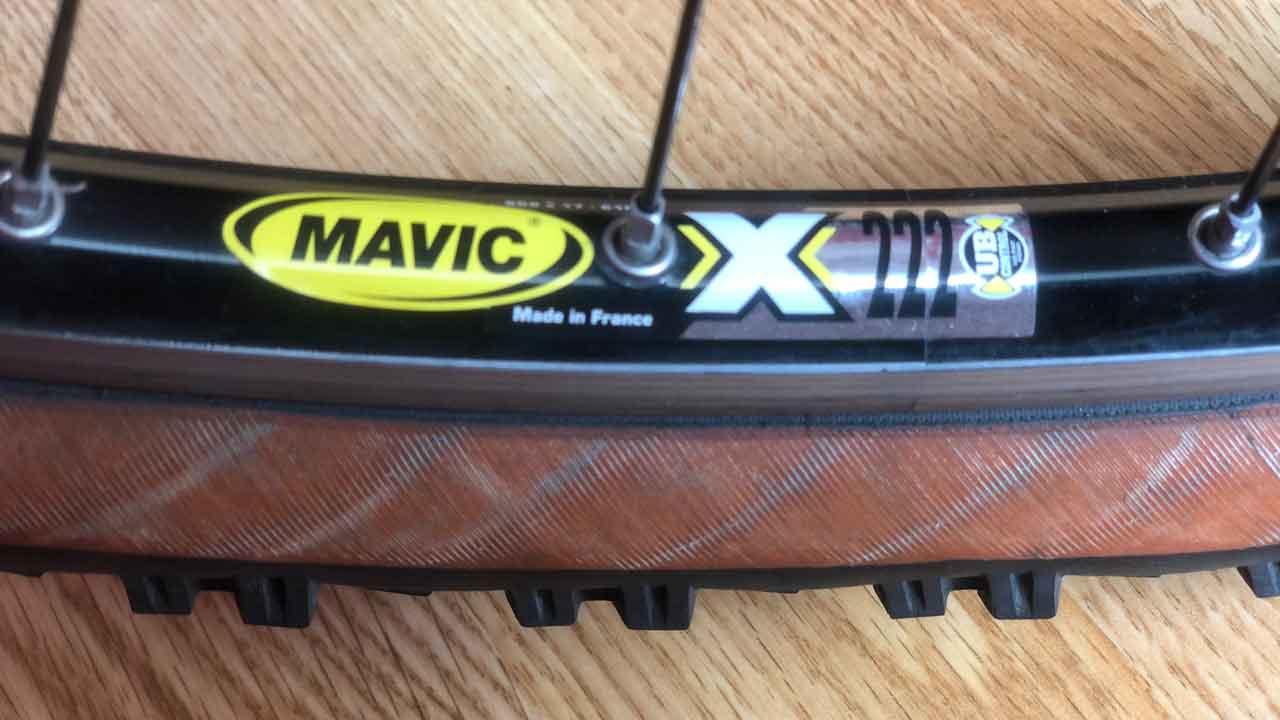 In this article I’m going to provide a number of the best vintage mountain bike wheels.

I’ve looked at all the top mountain bike models of the 80s and 90s from Cannondale, Koga Miyata, Trek and Giant and looked at what wheels were mounted.

It’s interesting to see a select few brands dominate the space. From Araya in the 80s to Mavic in the 90s when looking at rims. Shimano obviously dominating the space in both decades for hubs. And DT Swiss being the go-to supplier of spokes for a majority of wheels.

I will not go into tires since it’s always a better choice to have a set of new tires than twenty, thirty years old or older dried-out ones.

Newer tires can also be more fine-tuned to your particular riding style. For instance 26 inch slick mountain bike tires for more road-oriented use.

I will discuss rim brake wheels only.

I left out some of the more exotic wheels like the Following:

These wheels are incredibly hard to find and/or extremely expensive because of it. They are also all almost impossible to service since they consist of proprietary parts.

If finding a wheel is hard, finding parts for these wheels might be even harder.

But even without these exotic carbon spoked oddities, there are still more than enough gorgeous and more affordable wheels, which are easier to service and downright better.

If you’re a purist and happen to have a very early eighties mountain bike you might want to go for the clean-looking Araya RM-20. If you want a bit more beefy set of rims for your build you can also opt for the extra 5mm. of the Araya RM-25.

The RM-20 and the RM-25 come in both black and silver, so you can better finetune the overall color scheme.

They were used by multiple brands as the go-to solution for the first forays into offroad cycling.

Shimano started to dominate the market in the eighties. And the Shimano Deore XT is a solid hub that went with the rims.

Another legendary name in the sport of mountain biking, Juli Furtado, rode her first Yeti FRO with a pair of Specialized GX26 mounted to them.

Her version also included Campagnolo Euclid hubs and Wheelsmith spokes. I doubt you’ll get them in that setup, but you’re bound to find them fitted with a set of Shimano Deore XT hubs.

I once had a Cannondale M300 with Sun AT18 rims. The amount of abuse those rims could withstand was astonishing.

The Sun Rhyno Lite were mounted on the legendary Cannondale Super V DH 4000 model and I can only assume these downhill versions of the same brand are even stronger.

They come in a 26″ 24mm. width version, so plenty of room to mount some serious tires onto.

In 1997 Rolf Diedric decided “less is more” and brought a wheel on the market with a less than conventional number of spokes. We’d all had seen the carbon spoked wheels, but these wheels had somewhat normal spokes, only differently laced.

Almost entire upper lineup of Trek was decked out with Rolf wheels in 1999 (the Trek VRX 400 got Bontrager Maverick rims with). With Rolf Dolomite for the Trek VRX downhill section, and Rolf Propel for the Trek Y SL cross country versions.

The Rolf Dolomite wheels have a dual setup of 24 spokes front and back. The Rolf Propel had 24 spokes in the back and just 20 up front. They were fresh-looking and expensive. At the time I always marvelled at the the less-than-36-spoked wheels.

With this setup Rolf was able to reduce the weight by sacrificing a bit of wheel strength. If you’re looking for the strongest wheels available, look elsewhere.

Although the rim and spoke combi were generally considered rock-solid, the freehubs we’re not. So before buying, ensure they are in somewhat tolerable state or expect them to rumble along with you.

If you’re looking for an eye-catcher without going full tilt with carbon tri-spokes wheels, and still want to be able to jump of a cliff and survive with a 50/50 percent change, Rolf Dolomites or Propels are a sure bet.

These wheels are not easy to service.

The last entry in this list is a relatively new one, the Mavic CrossMax SLR. It was around 2010 that professional riders started using bigger diameter wheels in races and 26″ went out of fashion.

Mavic is a brand that dominated the 90s mountain bike wheels. Just as Shimano decided to offer entire groupsets for a specific bike, Mavic decided it was a good idea to offer entire wheelsets instead of individual parts.

This approach worked for Shimano as it defeated smaller specialized brands, and it also worked for Mavic in exactly the same fashion.

The fact that you can get it in a 26″ package for v-brakes makes it the perfect choice if you want to upgrade your retro build with the fastest XC wheels you can put in an older frame. And the rims are tubeless ready.

Expensive, extremely hard to find, hard to repair. If you find a pair, let me know.