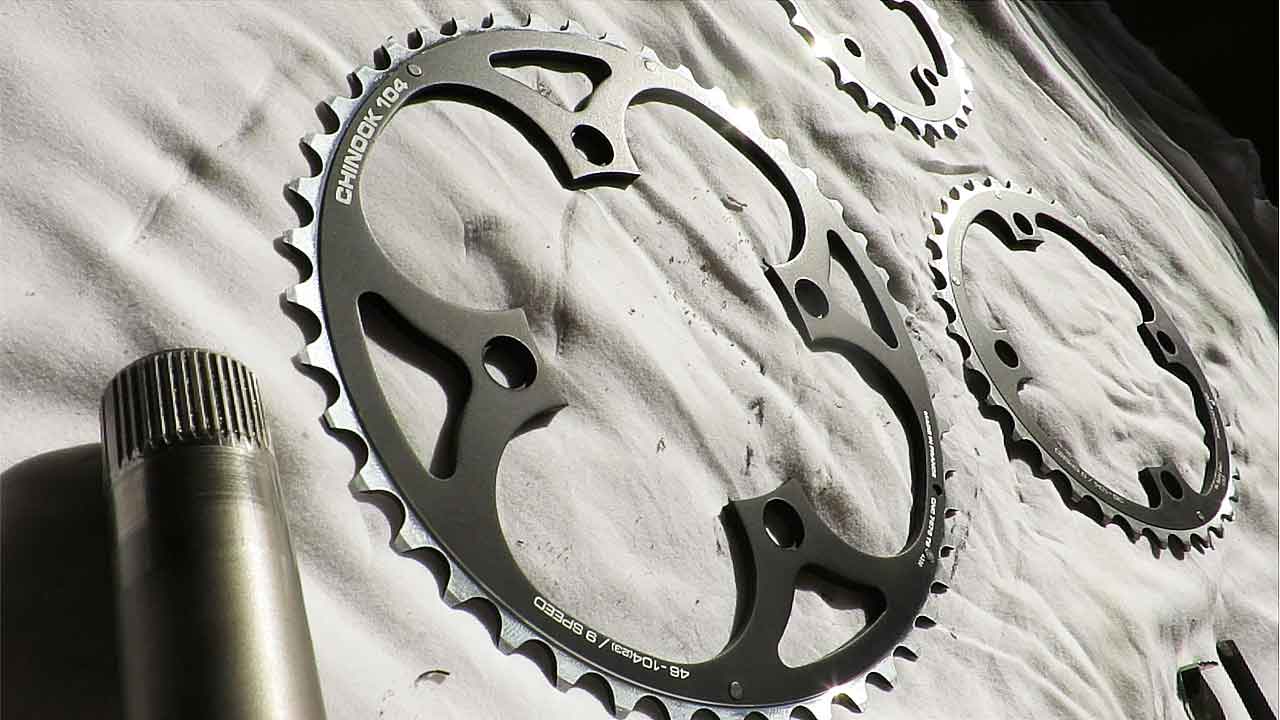 In this article I’m going to give you my TA Specialités chainring review, which is a solid contender for anyone looking beyond the standard (expensive) offerings from Shimano.

I know the French company’s name is actually the reverse: Specialités T.A., but that’s not how they are generally known in the market according to Google.

After i determined my optimal bicycle gear ratio, I bought my first TA chainring to swap out the worn one that came with the Hollowtech II crankset.

The next set was to swap out the existing ones for a CODA crankset, where I believed the existing mountain bike chainrings resulted in chain skipping. Incorrectly, as it turned out later, but that’s another story.

After I fixed a front derailleur not shifting to the highest gear, which included changing the outer chainring, I decided to make this TA Specialités chainring review as well.

One of the mayor benefits of TA Specialités chainrings is that they offer an entire range of sizes and BCD‘s or Bolt Circle Diameters.

For instance, the Shimano FC-M770 crank is incredibly cool-looking, but you’re stuck with the existing 32 teeth for the middle ring.

After I upgraded to a 36 teeth, which caused shifting issues, I was forced to move away from Shimano since outer rings other than 42 teeth weren’t available anymore for this crankset from 2007.

Since I bought a 104 BCD Specialités TA Chinook chainring I decided to change the inner 64 BCD 22 teeth and outer 104 BCD 42 teeth chainring as well.

My Cannondale Killer V runs a mixture of drivetrain components. It has Deore XT derailleurs both front and back, an Ultegra cassette, and TA Specialités chainrings.

The only thing that might improve shifting performance a little is to change the Deore XT rear derailleur to an Ultegra one, which has a shorter cage plate.

But that has nothing to do with chainrings and front derailleur shifting performance, which after the change to the Specialités triple is perfect.

The same goes for the Cannondale Super V, which also runs TA Specialités chainrings. Shifting in the front with this dual chainring setup is as smooth as butter.

How long a bicycle component will last depends on many factors, only one of them having to do with the build quality of the component itself.

A chainring is a pretty straightforward component, unlike less say shifters or derailleurs, which are much more complex.

Taking into account that I take extremely good care of my bikes, and the drivetrain in particular, the TA Specialités chainrings have shown little to no wear.

And I have no reason to believe that, with a similar care provided in the future, I will basically not have to buy a new chainring for years to come.

The look-and-feel of the TA Specialités chainrings fall somewhere in between classic and new. The black chainring with silver teeth look gorgeous on the FC-M770 crank.

Overall their product offering includes black chainrings, but they also have some in silver.

And for more vintage oriented bikes, they even have a retro looking crank, which is very nice indeed.

The chainrings from this French manufacturer are anything but cheap. The price of a new Deore XT crankset and 3 chainrings combined added up to €130, which is a considerable amount of money.

But for that type of money I finally finished the drivetrain of my beloved Cannondale with a gorgeous looking crankset, and with it ended a bike restoration project I had been working on for almost a year.