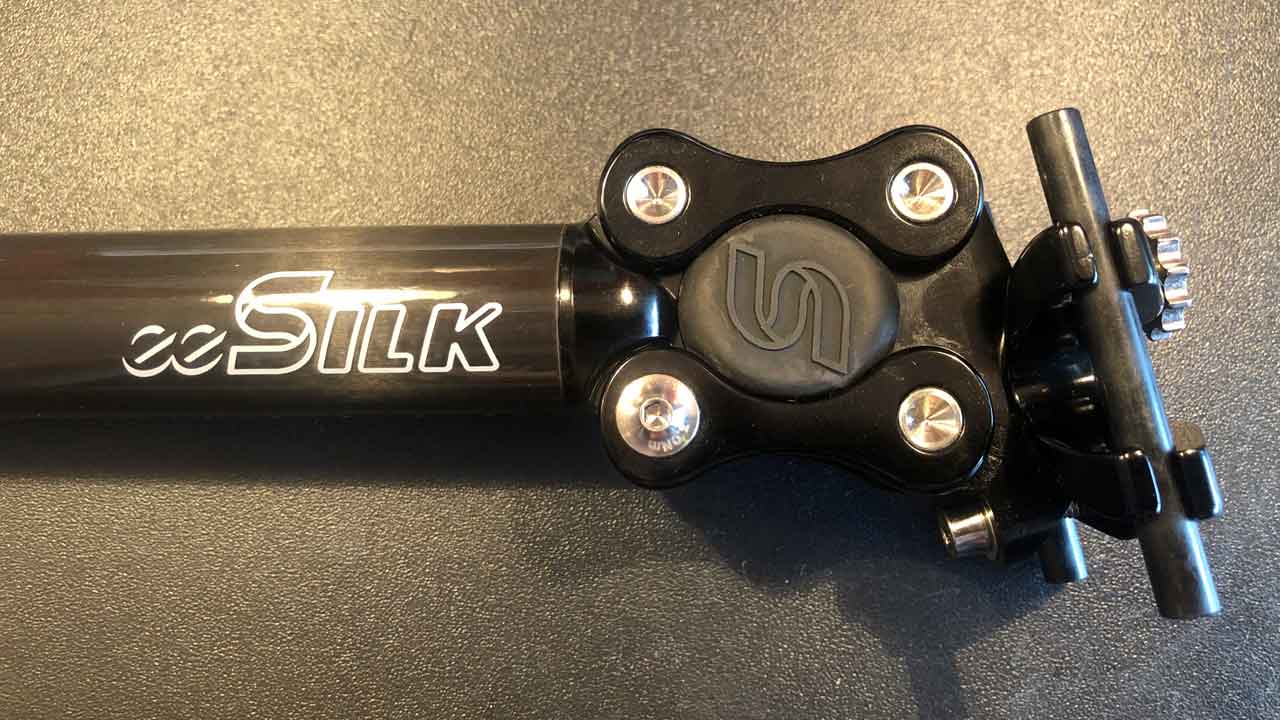 In this article I’m going to give you everything you need to know about suspension seatposts.

I always thought a seatpost was a seatpost and have never ridden anything else but rigid aluminium versions. Just a simple piece of kit that holds your saddle.

It was only after bought the ridiculous ax-lightness Phoenix carbon saddle weighing in at 68 grams that I also decided my Cannondale Killer V needed a seatpost upgrade.

At first the obvious choice seemed to be a carbon seatpost to complement the saddle. Another piece of kit with a nice carbon weave to pimp my ride. But when I started researching the subject I found out I could again go down the rabbit hole.

And so I went.

The seatpost as an element to increase comfort

One of the things I learned is that a bicycle frame is not meant to flex in any way. The classic dual triangle setup naturally resists flex from every direction. And that’s the way it’s supposed to be. If not, you’d be riding a noodle.

For all the work that road bike designers put into making their frames more comfortable, the simple fact remains that their triangulated tube layouts make them inherently resistant to movement under vertical loads.

The other thing I learned is that a steel frame does not guarantee a more comfortable ride than carbon. I always thought that carbon was the pinnacle of stiffness and meant to transfer as much power from the body to the wheels as possible, minimising the loss of energy.

This wasn’t true either. The ringing sound when you tap a steel frame actually indicates it’s incredibly stiff, whereas the dull thud on a carbon frame indicates it absorbs the energy rather than to transfer it.

If you’re looking for more comfort in your ride you should look into every other component than the frame. And one of those components is the seatpost. That notion was very new to me.

There are different types of seatposts, each with a different intended purpose. A seatpost on a bike used for the hour record is markedly different from one used to travel the globe.

I call seatposts “standard” when they were not specifically designed to include some function of vibration dampening or flex. Because of this they are indeed the most basic looking.

They might or might not have some degree of setback. The most common and cheapest material is aluminium. But titanium and carbon versions are on the market as well, and bring with them reduction in weight without compromising strength and stiffness.

But already with standard carbon seatposts you might experience quite a bit of added comfort as road buzz is filtered out and doesn’t reach the tender parts.

Then there are damping seatposts, seatposts specifically designed to increase the comfort of your ride and smoothen out road buzz. They won’t do nothing if you ride across rocky terrain and roads with potholes.

Carbon differs from metals in that it’s made up of different layers of the stuff. Because not every layer of carbon has the same structural characteristics it means you can create directional flex front and aft (not lateral), which serves as a damping effect.

You can compound this effect with the amount of setback you can achieve with a post and the stem shape.

For instance the Cannondale SAVE seatpost has all three components of flex, setback and shape as does the FSA K-Force SB32.

With the popularity of gravel bikes, an increasing demand for comfort created the next level in seatpost technology.

Leaf spring posts are posts which basically consist of two halves joined together at the top with a linkage system. This system ensures your saddle stays horizontal while enabling it to increase the amount of travel it can achieve.

Leaf spring posts like the Canyon S25 VCLS 2.0 add another element of comfort to your ride called “deflection“.

A seatpost with more deflection will reduce the fatigue on your body as it protects you from harder jolts like unexpected potholes or dirt road corrugations. It’ll also allow you to pedal through bumps on rougher terrain.

Damping seatposts can be used on all sorts of bikes, but if you want to go even further and be able to move over increasing rougher terrain you venture in the area of suspension seatposts.

The most seatposts listed here have some form of linkage system to enable a significant amount of travel. The suspension action is either created with elastomers or springs.

Brands also offer options in material with tried and true aluminium versions and carbon ones.

Probably one of the most beautiful one is the Redshift Shockstop. Both that one and the Kinekt Bodyfloat use springs vs elastomers.

When you move into the arena of suspension seatposts it means in general there’s a significant weight increase versus their damping counterparts. Only the Cane Creek Eesilk carbon version manages to stay below the 300grams.

However, considering these posts will be used on cycles more intended for endurance activities instead of racing you could argue those extra grams don’t really matter.

It’s worthy to note that it’ll prove to be difficult to achieve the maximum travel advertised. It would constitute a considerate amount of force being applied to the seatpost.

How to choose the right seatpost

When choosing a seatpost there are a number of things you need to take into consideration for yourself.

None of these seatposts are cheap. The Thomson Elite, one of the best aluminium seatposts, is less than half the price of most other seatposts mentioned here.

We have a saying in the Netherlands which roughly states it’s simply better to invest in quality products than to buy multiple cheap ones because they break. I generally adhere to that adage.

But should you then buy a 200+ euro suspension seatpost? I’ll leave that up to you to decide.

There is an inherent complexity in reducing weight while keeping the characteristics of the part and suspension seatposts are no different. It takes quality engineering to create a relatively light-weight suspension seatpost that performs as intended.

There’s quite a difference between the dampening effect of non-linkage seatposts versus the deflection effect of suspension seatposts. Basically damping is meant to kill road buzz whereas suspension will let you stay in the seat while you travel across rougher roads.

So depending on your intended usage you will probably be looking in one of these two categories, since the benefits they offer don’t really crossover into each other.

Some seatposts I found downright ugly. The Redshift Shockstop was even designed having an aesthetic USP in mind. I’m a big sucker for design, so you won’t see me putting a Thudbuster or Bodyfloat on a road bike, but to each their own.

I couldn’t find anything about failures after prolonged use. What I did find was that seatposts with linkage systems are more vulnerable for obvious reasons. They creaked, they showed signs of play, etc.

And I can state from personal experience that an 8-pivot linkage system is likely to wear out after thousands of kilometers. I’ve seen it with the front suspension on my folding bicycle where the compounding effect of hard riding and mileage introduced significant play.

If you buy a suspension seat post I don’t think you’ll buy it to ride it the rest of your life. But maybe I was born during an age where that still mattered.