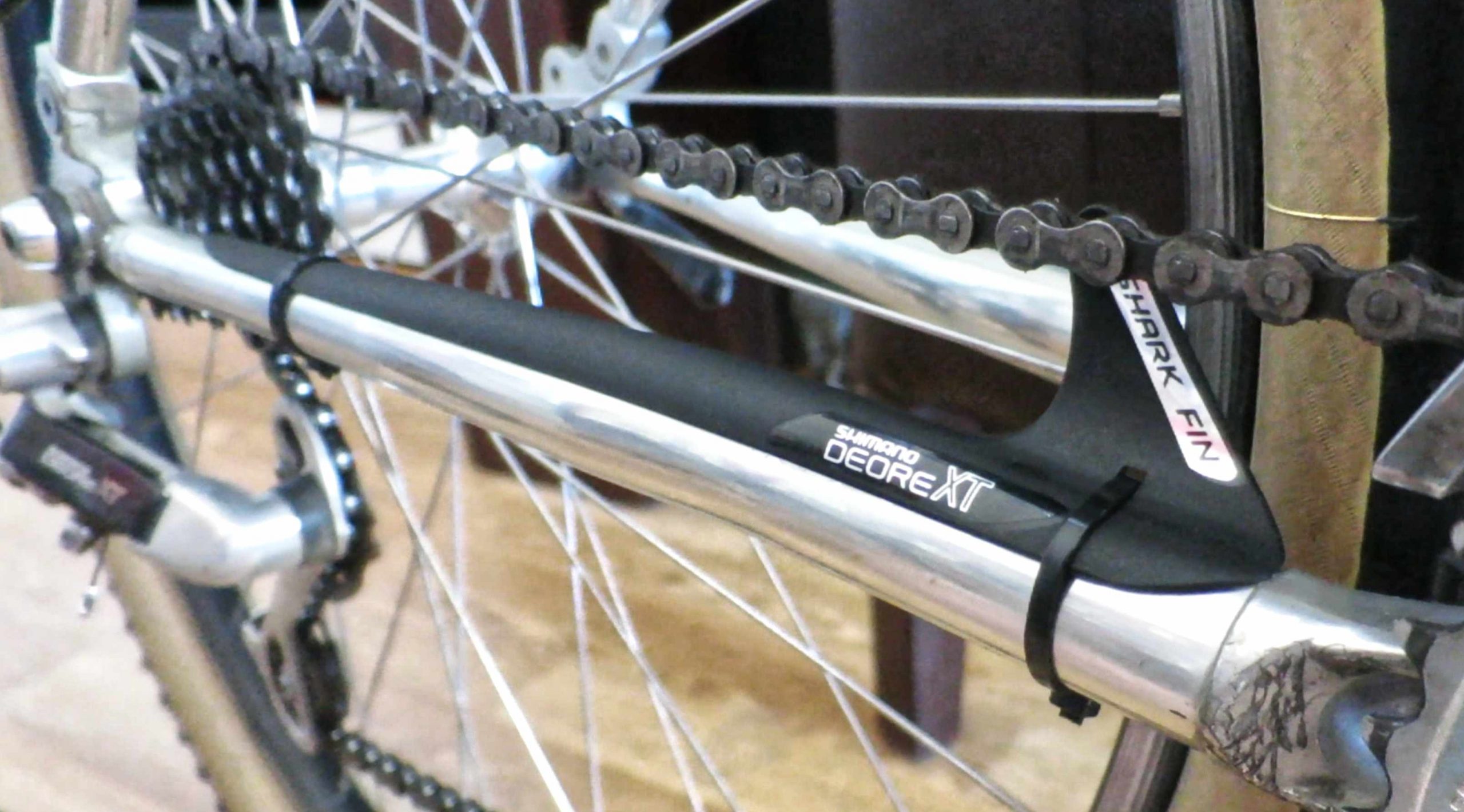 In this article I’m going to explain how to install a Deore XT Shark Fin chain deflector from 1989.

The Shark Fin is an elongated piece of plastic used to protect the chain stay. Near the front derailleur it ends in something resembling a shark fin, hence the name.

This shark fin has a curve, which means it also prevents the chain from ever getting caught between the tire and chainstay.

What’s in the package

Besides the chain deflector itself, it also ships with an adhesive strip and two cable ties. Since this piece of equipment is from 1989, the adhesive turned out to be crap and wouldn’t do anything on my square chainstays.

I bought it new for €20.95 at a local webshop specializing in retro cycling hardware. This isn’t exactly cheap for a little piece of plastic, but they are not that easy to find nowadays.

The first thing I did was to apply the adhesive to the Deore XT Shark Fin. The adhesive fits near perfect so this is easier said than done.

I carefully placed the adhesive in the correct position before applying pressure. Once in place it’ll be impossible to adjust it in any way.

Obviously it’s adhesive on both sides. Getting the paper off proved to be extremely difficult. You can see the paper got torn before I was able to remove it.

In fact it was so difficult that at first I even doubted if it was sticky on both sides instead of dealing with some sort of decal. In the end I used a surgeon knife to peal of the other side.

According to the manual the tip of the Shark Fin needs to be positioned about 2-5mm away from the chain when it’s in its lowest gear. The tip also needs to be aligned roughly with the rim.

Tying it down with cable ties

What you’ll find is that when you try to put the Shark Fin in the correct place, the adhesive does very little to actually keep it there. That’s where the two cable ties come in, which do a much better job.

The Shark Fin is also a straight piece of plastic, whereas the chainstay on my Skyrunner wasn’t. Also the fact that the chainstay was less round meant all-in-all the Shark Fin just didn’t really fit and wouldn’t be kept in place even if the adhesive did do its job.

Does it do the job?

I have to admit that the core reason I bought this piece of vintage hardware was to add a period-correct piece of equipment that had the name Deore XT on it. The Koga Miyata Skyrunner Carbolite has Deore XT all over it so it really seemed like a nice little addition.

That being said, the Shark Fin does exactly what it’s supposed to do. It not only protects your chainstay, but also actually moves the chain away from the chainstay. This means it greatly reduces that classic chain slap noice, no matter how rough your ride gets.