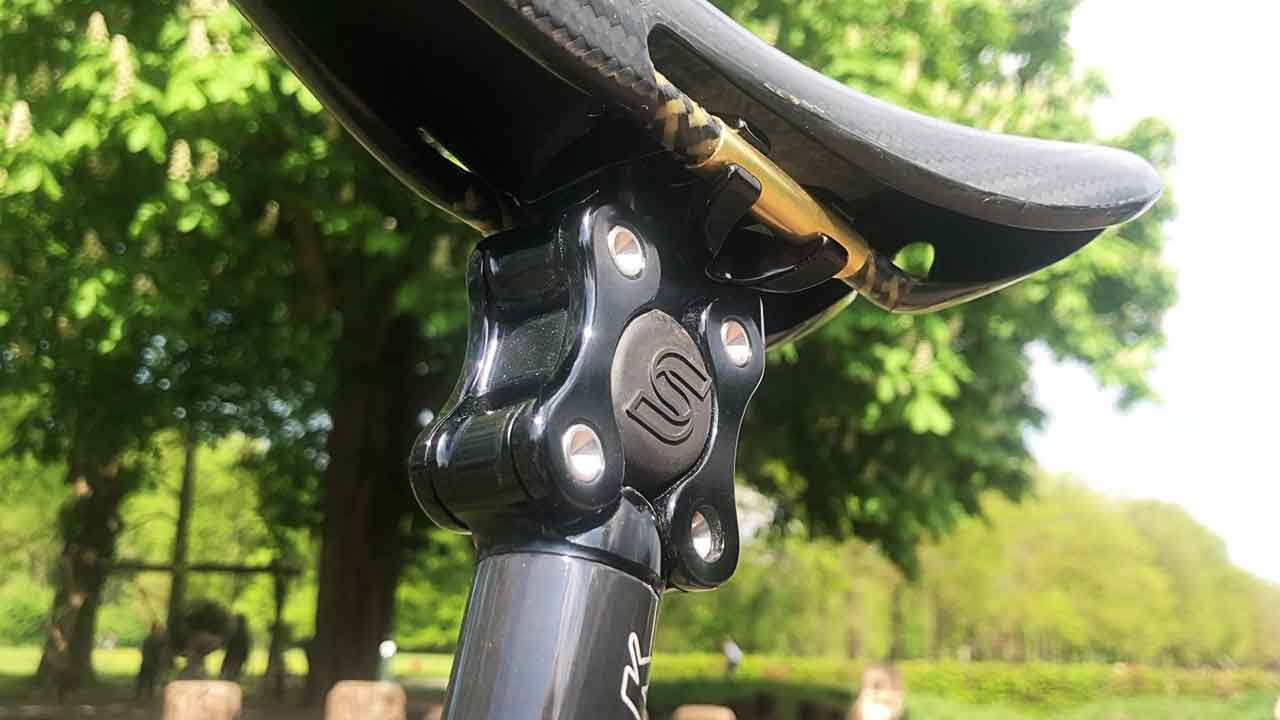 The niche within which the Cane Creek eeSilk carbon seatpost resides is very small, but it dominates it with verve.

The Cane Creek eeSilk is a suspension seatpost I bought based on my own research into the subject matter. I was actually looking for a regular carbon seatpost.

But as I learned about the Cannondale Save seatpost, which is a damping seatpost working with Directional Carbon Flex, I was introduced to the world of suspension seatposts.

Word of caution when buying this seatpost. The bottom rear axle bolt loosens and falls out. You can clearly see the bolt missing at the end of the YouTube movie.

I was not aware of this until the entire axle nut jutted out from the side. I strongly suggest fixing this bolt into place with Loctite or you’ll loose it sooner or later. I’m not the first being confronted with this issue.

What do you get when buying a Cane Creek eeSilk carbon seatpost?

I finally decided upon the Cane Creek eeSilk carbon seatpost to replace a Kalloy Uno SP-248 seatpost. I consider the Kalloy Uno to be one of the best budget-friendly aluminium MTB seatposts.

The eeSilk is definitely not budget-friendly. Any premium suspension seatpost is expensive, and the Cane Creek eeSilk seatpost is very expensive at a retail price of $199.99.

But the carbon version sets you back an extra 100 dollars at $299.99 and tops my list as the most expensive suspension seatpost in the world.

I couldn’t find the carbon version anywhere except on Ebay.

And what is it exactly that you’re buying when you lay down this amount of money. An amount for something many would consider a simple requirement to attach a saddle to a frame?

The suspension is achieved by putting an elastomer in between the linkage system. There are 5 different elastomers, ranging from extra soft to extra hard to achieve the desired travel based on the rider’s weight.

The seatpost comes with the medium version for riders ranging between 68 and 90 kilograms. 68 to 90 covers quite a range and suited my bodyweight of 85 kilos.

But if you need or want another elastomer you have to lay down another 13 dollars.

The carbon version of the Cane Creek eeSilk replaces the standard aluminium post with unique-looking glossy carbon post, which is 25mm. longer.

I would have preferred a carbon weave to match my ax-lightness Phoenix saddle and Spinergy Rev-x Roks wheels but alas.

The post scratches extremely easy, so be sure you know how far you want to put it into the seat tube to prevent visible scratch damage. The rear of the seatpost has white dots running down it to make it easier to set the correct saddle height.

Just as the regular version it has stainless steel pivot axles. But the seat clamp thumb wheel is titanium. Together with the carbon post this causes a weight reduction of 50 grams, making it the only sub-300 grams (295 gr.) linkage system suspension seatpost I know of.

The eeSilk is meant for bicycle saddles with 7mm. rails. Unfortunately I didn’t knew that upfront. It meant I ran into trouble with the 8mm. from the Phoenix saddle, which has 8mm. rails.

At first I just used the seatpost as is. But considering the price of the carbon saddle and its rarity, I decided to protect the rails against the bite of the eeSilk saddle clamp.

I don’t know if its a term that exist but I decided to create 8mm. brass bicycle rail shims.

With the shims in place, either the clamp will break or the bolt will snap before the incredibly strong carbon rails will damage. I’m not going to try that out though.

The Cane Creek eeSilk carbon seatpost offers a maximum of 20mm. of travel. That’s at the lowest end of all parallelogram linkage seatposts. Their Cane Creek Thudbuster LT offers almost 5 times as much with 90mm.

The installation of a bike saddle is an absolute nightmare, especially compared to the single bolt clamp system of the Kalloy Uno, which can hardly get any better.

It’s difficult to move the saddle rails in between the two halves of the clamp. I probably did it wrong and removed the rear bolt to get the saddle in place. Getting the bolt back into place simply sucks. And then getting everything tightened up sucks even more.

The top half of the clamp has the tendency to sit further back than the lower half, which looks stupid.

And since the front bolt is tightened with a wheel that sits in between the saddle and the clamp you effectively only have one bolt to set the saddle tilt. This means you constantly have to loosen the rear bolt, turn the wheel, tighten the rear bolt, check the angle, and repeat this process because you’re probably of by a couple degrees.

This painstaking process of getting your saddle on top of the post and with the correct angle is far from user-friendly and kind of detracts from the premium feel of the seatpost. The thing looks amazing when finished but it’s a b!$%h to get to that place.

What problem does the Cane Creek eeSilk carbon seatpost solve?

So what exactly does the Cane Creek eeSilk carbon seatpost do besides look good on the Killer V.

A lot of linkage seatposts are dead-ugly. Besides the almost twice as heavy Redshift Shockstop (547 gr.) which also squarely focuses on design, the eeSilk is a extremely tidy package for a linkage seatpost. And also the best-looking one if you ask me.

Cane Creek specifically states not to use the suspension to try and overcome potholes.

With 20mm. of travel you can hardly argue that the eeSilk is meant to add rear suspension to your bike. The Eesilk is meant to smoothen your run on a relatively uneven road, pavement or hard-pack.

And it does this exceptionally well. The great thing about the eeSilk is that you don’t notice the suspension until you need it. This means you don’t have a bounce to your cadence, which ensures an efficient power-transfer to the pedals.

It’s a tough stretch to state that the Cane Creek eeSilk carbon seatpost warrants a 30x price increase. From a 10 dollar Kalloy Uno to a 300 dollar eeSilk.

But for what it’s supposed to do it does almost everything right. Great design, quality engineering, working correctly and hopefully long lasting.

Apart from the missing carbon weave and the horrific installation process, I’m happy that I’ve spent the money to obtain this rare piece of bicycle kit for my retro MTB build.