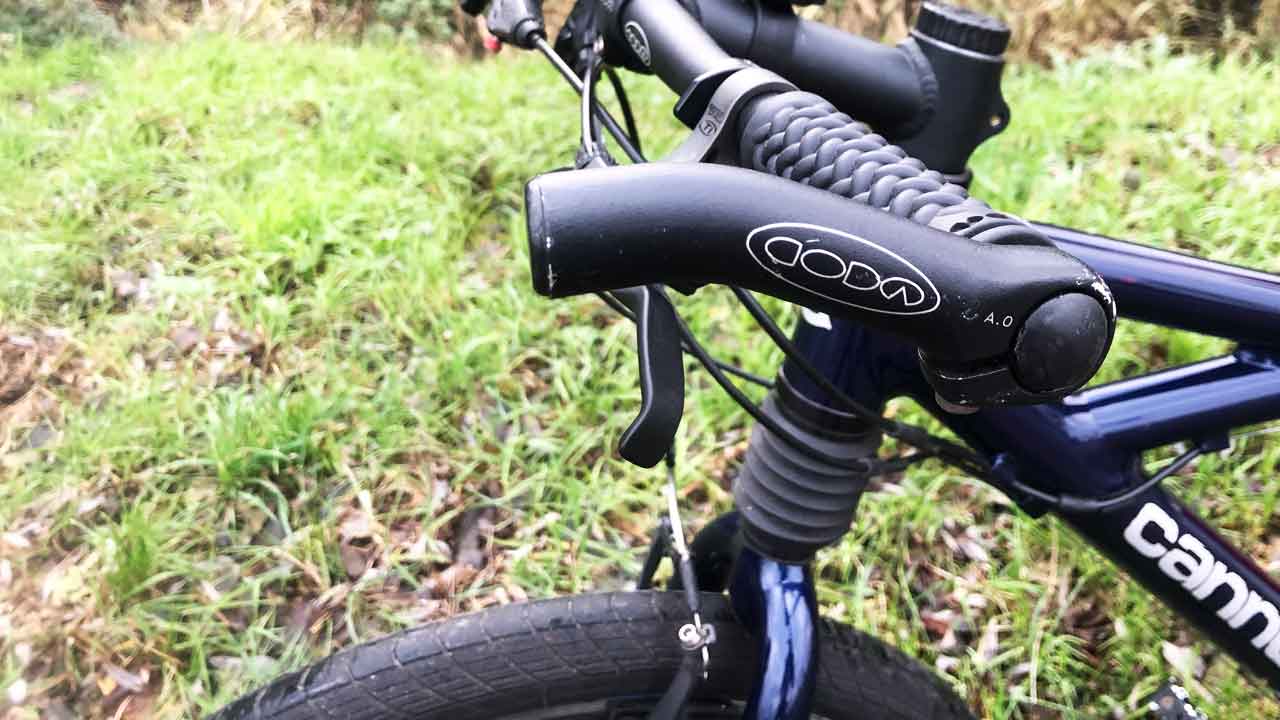 Today I swapped both the handlebar and bar ends from my Cannondale Super V to my Cannondale Killer V. The Super V proved to be too small for me so I’m planning on selling it anyway.

But not before I changed the CODA Expert handlebars into CODA Competition, which saved me 22 grams (196 vs. 174). And the CODA Babu bicycle bar ends.

Since I’ve also added several bicycle catalogs to this site I noticed a certain time period when bar ends were absolutely ubiquitous, and a period when they we’re not. It made me want to learn more about this little piece of cycling tech, which is now considered both very retro and very not done on today’s mountain bikes.

The evolving industry within which bicycle bar ends could exist

The example showcases 2 models from the first Koga Miyata’s 1976 catalog using the exact same frameset and all but the same components.

During the early 80s bicycle brands quickly started adding bicycles to their lineup which could be used for more off-road purposes. Trek’s 1983 catalog featured 13 road bike models and their first and only mountain bike for that year.

Already in 1989 the mountain bike category would have its own catalog of 10 different models.

The mountain bike revolution spawned an enormous variety of models and different types of bicycles. You didn’t either commute or raced with your bicycle. Their was an entire range of bicycle setups to explore in between the stiffest bikes meant for road races and the evolving requirements of bikes needed to bomb down unpaved forest trails.

Among Trek’s 1989 lineup suddenly there’s talk about “mountain“, “singletrack“, and “trail” versions of what would previously simply be called mountain bikes. All still without any suspension I might add.

While the bicycles still very much resembled each other, except maybe for the the tires, this distinction was a sure sign of where the industry was heading. We still have the Downhill and Cross-Country or XO disciplines in mountain biking. Also categories which were the first to be featured during the inaugural 1990 Mountain Bike World Championships.

What Trek called “Trail” in 1989 would be more broadly be called the “Hybrid” category. Mountain bikes with less wide tires and less aggressive rider stance meant for cycling on pavement or forest trais.

This evolving industry and the bicycles they came up with was the foundation within which bicycle bar ends served a purpose.

Prevention of pain and numbness with bicycle bar ends

As road- and touring bikes diversified into other types of bikes meant for exercise, the chance of numbness and pain to wrists and hands increased. This condition is called “Ulnar neuropathy”.

A relatively common complaint among cyclists known medically as Ulnar neuropathy but also as handlebar palsy. It’s caused by compression of the ulnar nerve, which enervates your ring and little finger, and manifests in the fingers as tingling, numbness or pain or weakness in the hand.

The reason for the increased risk is that traditional drop bars were replaced with conventional handlebars. But one of the big advantages of drop bars is that it enables riders to switch hand positions and alleviate stressed areas.

That being said it’s interesting to note that drop bars were replaced by elaborate handlebars that enable a more upright position. Meaning drop bars, even with their ability for different hand positions, aren’t seen as all that comfortable for long distance cycling.

Koga Miyata is, among other things, well known for their lineup of long-distance bicycles. Koga Miyata’s RandonneurAlloy was the first touring bicycle that moved away from traditional drop bars in favor of a patented “Combi” bar. An oddity which is a drop bar with conventional handlebars wrapped into one.

Also be sure to note the placement of the front-mech shifter at the back of the seat tube.

2 years later in 1993, the Combi bar was dropped in favor of something that very much resembled handlebars with bar ends. Koga Miyata would never again introduce drop bars for touring bicycles.

Anyone who’s ever climbed a very steep hill on a road bike knows you automatically shift your hands towards the hood of the brake levers. This is the most optimal position to keep your upper body in place when you power down the pedal and engages the muscles of the arms.

And as we moved from road cycling to off-road cycling drop bars weren’t dropped immediately, as famous rider John Tomac demonstrated in the first Mountain Bike World Championships of 1990.

The shown Bridgestone MB-1 from 1987 came with drop bars, citing “jumping the bike was easy”. With the advent of gravel bikes and drop bars we’ve come full circle after twenty years.

But the overwhelming majority of riders would prefer flat bars, because of its ability to exert far more control over rough terrain. And soon bar ends would come in all sorts and sizes. By the early 90s, the popularity of mountain biking backed by sanctioned competition pushed bicycle bar ends into the spotlight.

Every catalog from mayor brands would feature mountain bikes with bar ends. And in every section dedicated to parts, bicycle bar ends would be incorporated as well.

The end of bicycle bar ends

Somewhere along the line, bike catalogs would feature less and less mountain bikes sporting bar ends. It happened in the early to mid 2000’s.

It was in the first decade of the new millenium that pro riders would use bigger wheels, from 27.5 inch to 29 inch wheels. And their bikes would also significantly increase the size of the handlebars.

It’s not uncommon for a modern bikes to run handlebars with a length way over 700mm. If you compare that to my CODA expert handlebars, which are a mere 560mm excluding the length of the bar ends, the difference is beyond astounding.

The 90s we’re long stems, short handlebars, 26 inch wheels and bicycle bar ends. And everybody still used them moving into the new millennium.

At the end of the first decade into the new millennium only a few riders would use bar ends. 5 years later I couldn’t spot a single one anymore. The time of bar ends was definitely over.

To understand why the usage of bar ends died we have to look at the competition level. There has always been a number of reasons why you wouldn’t want to use bar ends.

I don’t think it to be a coincidence that because courses changed, bikes changed with it. I believe you can still design a cross-country course with long enough climbs to warrant the use of something resembling bar ends. But that would mean turning cross-country into a off-road version of the Tour de France and the UCI doesn’t want that.

So in the end I believe the use of bar ends on mountain bikes died because they belonged to something that doesn’t exist anymore.

Where you could win a downhill competition and cross-country course on the same bike in 1990, that will be impossible today. Mountain biking has evolved in several distinct disciplines.

And not a single bike evolved within those disciplines needs bar ends anymore.