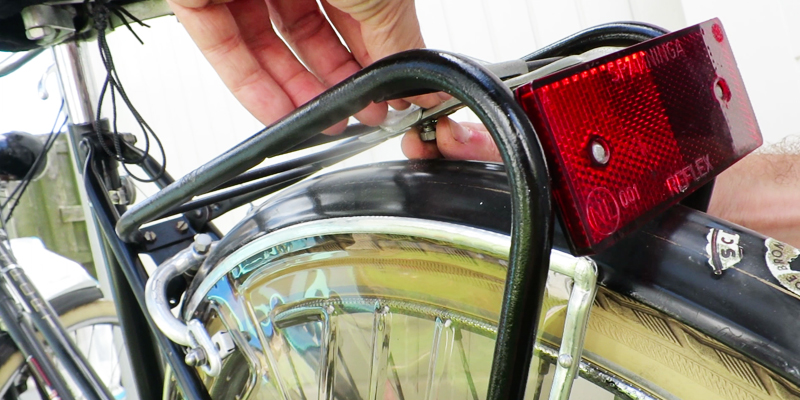 In this article I’m going to explain how to install a vintage bicycle reflector. The bike is my wife’s restored Ricardo Sport from 1976. It’s a lovely old-style city bike.

When I found it the rear luggage rack was bent. Probably because more than one adult person had been riding the bike. On top of that the reflector mount was bent as well with part of the reflector snapped off.

I always felt it looked like a blind eye when cycling behind it. And since the rest of the bike was pretty much in order, this last part kept irritating me.

I’d actually put the mount without the reflector back on the back, thinking I would be able to use any other reflector. This was wishful thinking. The vintage bicycle reflector was riveted, with the holes not spaced apart the same length as reflectors that are bolted on.

So I had the option to drill a new set of holes or find a replacement. These type of reflectors we’re commonplace back in the 70s but they are impossible to find nowadays. During my holiday I accidentally happened on another person who lived in the neighbourhood and restored bikes himself.

Besides a set of incredible vintage frame locks, he also was kind enough to pry off the same styled reflector from one of his bikes.

Installing the vintage bicycle reflector is a straightforward proces. You put the straight end of the mount underneath the horizontal bars of the luggage rack. Two clamps sit atop this straight end end fasten the entire thing to the rack.

There’s not much space for your hands to move, so it’s easier to mount the reflector while the luggage rack is still of the bike. Since this was not the case with me, I was left fidgeting around with the bolts until I got them right.

In my case the straight part turned out to not be as straight as I would like it to be. But it’s nothing but a simple piece of steel that’s easily bent back into shape.

And that’s how you install a vintage bicycle reflector! Short but sweet. If you like this article give it a thumbs up. If you have any questions or suggestions for new articles, let me know in the comments below. Cheers.