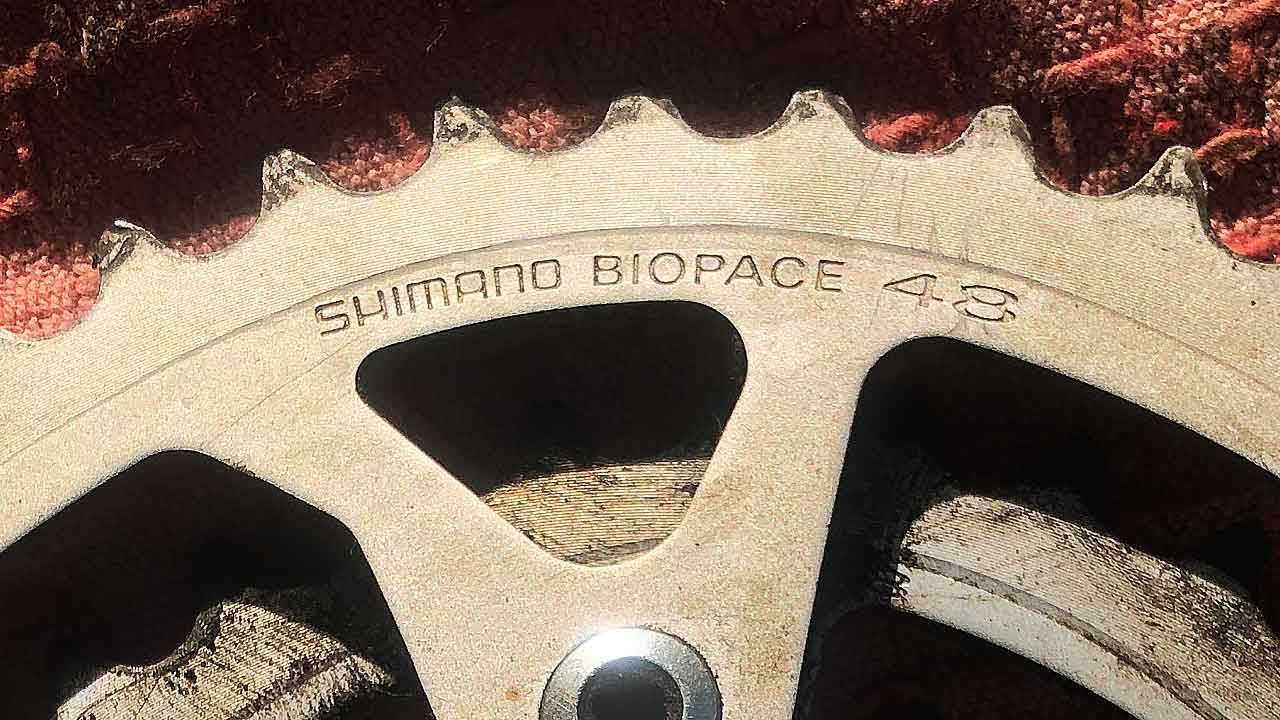 In this article I will explain how I restored a Shimano Biopace triple crankset. I don’t know why, but ever since I first got to know about the elliptical chainrings of Biopace cranksets, I fell in love with them.

Biopace crankset were produced from 1983 to 1993. Much to my enthusiasm my Koga Miyata Adventure features one. Unfortunately, after closer inspection, it turned out the non-drive side was the original one from 1986 whereas the crank arm on the drive side was apparently replaced with the version of 1989.

Although I would’ve rather have the original version from 1986, I only found the 1989 version which was within the price range I was willing to pay. It came without the chainrings, but that didn’t matter because I already had those.

Where to find a Shimano Biopace triple crankset

As far as volume, there’s no better website than Ebay to buy vintage bicycle parts. Since I’m not from the United States I rarely buy from bicycle parts from that country, considering the shipping costs.

There’s also another reason I rarely buy from Ebay and that’s cost. I just did a search for “biopace crankset” and the lowest “buy now” listing was 59 USD. Your better off finding a complete bike for that kind of money that includes a Biopace crankset. I’ve done so for about 30 USD. The entire bike and crankset was in mint condition.

The best place I found to feature cheap Shimano Biopace triple cranksets is the German Ebay called “Kleinanzeigen“. I actually found one for €5 which is ridiculously low priced, so be sure to check it out if you’re from the EU and you’re unable to find one more locally.

The crankset was so dirty I firmly believe the previous owner never cleaned his bike. But, to a certain degree, dirt actually protects bicycle parts. And I knew it would come of easily.

Before being able to disassemble the crankset I needed to clean the holes for the allen key to fit.

I never had a chainring nut wrench because, until now, I never needed one. But now I certainly did because all but one bolt was seized. So I made one from a 5 eurocent coin. It has the correct width too fit a chainring nut. But I do advice to buy the wrench.

At first the DIY chainring nut wrench was too soft and bent. But after applying a little WD-40, rotating the nut a couple of times for the WD-40 to set in and then retrying with the DIY wrench, they loosened.

The next obvious step was actually cleaning the stuff. I (re)use mineral spirits for all cleaning projects that involve removing grease. That includes cassettes, chains and chainrings. It’s amazing how good of a cheap cleaner it is.

The reason I’ve included a polishing step is because the crank arms had definitely lost some of their luster. I don’t believe they we’re ever as shiny as I would turn them into, but they had seen better times.

This is not the first crankset I restore. I’ve also done a 1994 Deore XT crankset restoration, which was much harder because that one was pretty beat up. Restoring a crankset with damage also requires a sanding step before polishing. Luckily for me that wasn’t the case this time.

I polish the aluminium crank arms using a machine polisher, which is pretty cheap, considering the fact I use it to pretty much polish anything I can get my hands on.

The first two of four steps is using cutting compounds to remove any surface scratches. You use one of two wheels on the machine polisher in this step with a more rough cloth.

This step actually does 90 percent of the final result. But using the cutting compound can introduce swirls on the aluminium, which need to be removed in the last two polishing steps.

There are two polishing compounds that provide a mirror finish to your aluminium crank arms. I use a cloth underneath the wheel to catch all the debris that flies of the wheel. And the blue towel is because the aluminium can get so hot you cannot hold it with bare hands.

I also use a paint mask so I don’t inhale the fine dust coming of the wheel. Safety first.

I lay out all the parts and grease the bolts that need greasing. I don’t want to use my DIY crank bolt remover again. At least not on this crank.

Luckily I took pictures to ensure the correct spacer went around the correct bolt. As it turned out I needed them.

I believe my crankset had original bolts. Or at least they were the ones with the slot in them. I also saw that some spacers had been renewed so decided to combine spacers from my other crankset as well.

And with the assembling done you’re left with one very shiny and very cool Shimano Biopace triple crankset. If you like this article give it a thumbs up. If you have any questions or suggestions for new articles, let me know in the comments below. Cheers.