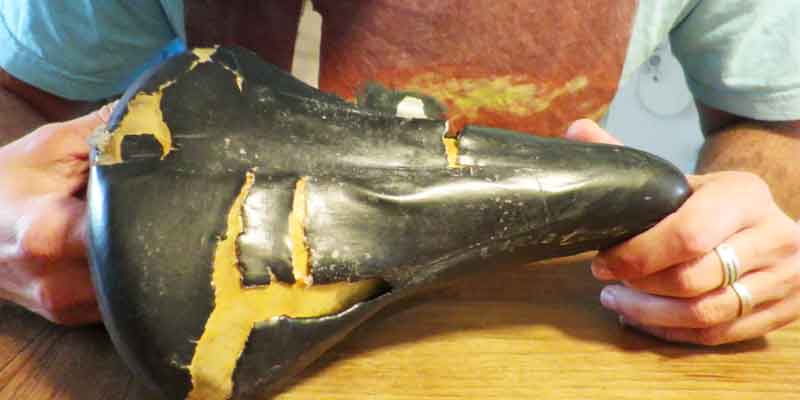 In this article I’m going to provide a number of tips for restoring old bicycle saddles. This restoration project was a first for me. And as always when doing something for the first time, you’re bound to learn something you wished you knew before you started. But that’s just the way you learn.

Any ordinary person would definitely say that the saddle I restored, wasn’t worth the effort. But it’s not always about the money or resources involved, it’s about the journey and what you take out of it along the way. And I definitely got my money’s worth with this saddle restoration project.

The saddle is a ’91 Cycle Tech, which appears to be somewhat of a budget brand and a wholesale retailer for Europe in cycling parts. But the brand name is so generic I couldn’t find a specific website. It came with my 1986 Koga Miyata Adventure.

But I liked the shape of the saddle, the fact that it was very old, and the fact that it was in such a bad shape that restoring it to its former glory would be a personal victory from a bicycle restoration perspective. And I would be doing it with a new leather seat cover instead of the plastic one.

So let’s get started!

In my life I’ve seen very few saddles that have been in worse condition than this one. The seat cover was torn to shreds so the discolored foam underneath could be clearly seen. The seat had been covered in multiple anti-rain covers so it could still be used.

About 80 percent of the glue that functioned as an adhesive between the cover and the foam had let loose. All in all, the saddle was in extremely poor condition. That being said, I liked the overall shape and saw its potential.

Luckily cover came off easily enough. I simply had to remove the staples and could pull it off without any issues.

I removed residues of glue with sticker remover. Hard to reach areas with thick layers of glue got treated with a screwdriver.

The foam had those traditional gouges where the rider’s weight pushes it onto the the hard surface of the bottom shell. I tried to fill them up with glue, which only worked partially because the foam soaked up the majority of the glue.

I didn’t have loose parts of foam lying around however. But considering the time restoring old bicycle saddles gobble up, adding foam is definitely worth the effort.

It was much harder than I thought to obtain a piece of leather. I finally bought some from a Turkish tailor, and even he didn’t have much lying around. At 16.50 euros it was relatively expensive (I found a retro leather Selle Italia for 20 euros).

I ironed the old cover first, keeping a piece of paper in between the cover and the iron so glue or anything else would melt and stick to it.

Next time I will cut out a larger piece of leather. It would stretch so much over the saddle that the place where I thought the edge would be would turn out to be somewhere else by a big margin. Leather simply stretches much more than plastic.

I also wouldn’t dye the leather before applying it to the saddle. The initial paint job easily rubbed off when I applied a large amount of force to get the leather in the right position on the saddle as you will see later on.

I used both superglue and spray glue. I’d seen the spray glue variant from oldshovel but mine was of the cheapest kind so I just wanted to be on the safe side in terms of stickiness.

But when I actually put the leather cover on I was surprised by the adhesive nature of it all, which was probably due to the fact I used almost an entire tube of superglue. But the spray glue worked just as well.

I don’t have a stapler gun, which is the more traditional way of making sure the seat cover stays in place. But even though it turned out to be a bit more of a mess, the glue worked just as well.

I don’t have a particular strategy for making sure the leather is put on nicely, other than you should make sure there’s enough tension on it. That the leather is stretched enough to stay smooth after you’ve used the saddle.

I temporarily used normal pegs to keep the leather in place while the glue dried enough so it stayed stretched. But these pegs might damage the leather if stayed on for too long, so I removed them within 10 minutes.

It took some time to also correctly glue the leather on the underside of the saddle. When I was confident all was in the right place I commenced trimming excess leather.

Step 7. Keeping the leather in place

The leather around the nose of the saddle proved to be troublesome with staying in place. Since I still didn’t have a stapler and further gluing wouldn’t do any good, I used screws and washers to keep it in place. I used 4 more on the plastic back railing.

Step 8. Dying the leather (for the second time)

Since the paint job with the leather of had become such a mess I redid it with Kiwi Scuff Cover. In addition to enable you to dye leather (after several iterations) it also makes the saddle waterproof.

And that’s what you can do when restoring old bicycle saddles! If you like this article give it a thumbs up. If you have any questions or suggestions for new articles, let me know in the comments below. Cheers.

Q: How long did the dye last after the second application? I’d be worried to wear white jeans while riding with this saddle!

A: I just finished and rode the bike it’s supposed to go on. With about 40 miles on I didn’t see any dye come off. I also checked my dark gray pants and didn’t see anything on it. I’ve also done an early 80’s white suede saddle cover which proved to not hold the dye so well. I had to reapply the dye a couple of times before the cover stayed black. I’ve now ridden that one for several thousand miles. Long story short is that you have to become confident in the dye not coming off before wearing those white pants on it. And different saddle covers behave differently.