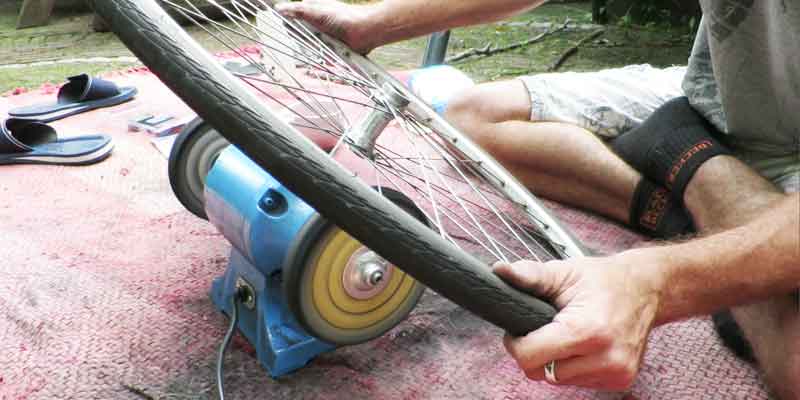 In this article I’m going to explain how to polish bicycle spokes. The spokes on my Koga Miyata Adventure looked so bad I actually thought all of them had rusted. However, since the rear cassette had rusted a film of dirt and rust had been applied to the spokes over the decades.

The dirt had settled into an extremely nasty coating and would not come off simply by trying to rub it off. But since the front wheel looked distinctly different I found out the spokes we’re indeed stainless steel. The bike’s brand is a Koga Miyata and I don’t believe they ever brought out a product without stainless steel spokes.

The very hard road would be to take the entire wheel apart, polish each part, and put it back together again. But since I don’t know how to build wheels and don’t have a truing stand that would be out of the questions.

Before I started cleaning the hub I removed the rear freewheel (I end up doing both wheels). After that I tried to remove as much crud as was humanly possible, which was very little. So I decided to start sanding them. I never start with a low grit sandpaper, but they stuff was so nasty I had absolutely no choice.

And as always sanding simply takes up a lot of time. Some areas, especially around the hub and where spokes cross each other, are hard to reach. And my hands are too big to reach in between the spokes. It means you have no other choice than to enjoy the process and see yourself working towards another part of your project restored to its full glory.

You can’t just stick with an eighty grit sandpaper and leave it at that. You’ll clearly see scratch marks on the spokes if you do. Marks your machine polisher will not be able to remove. So, as with polishing aluminium cranks, I moved all the way up to an 800 grit wet sandpaper.

I only sanded the spokes. I didn’t do either the hub or the rims. A lot of metal parts are anodized to make them more resistant to wear. Polishing any part always involves removing this thin anodized layer. Your bicycle parts will look nicer, but are weaker in the process. And since rims are most likely to get into contact with dirt and water, removing the anodized layer is not a good idea.

After you have sanded the spokes it’s time to polish them. I needed to find the right position and strategy to polish all 36 of them. The wheel obviously is a large and clumsy object to hold while polishing the bicycle spokes.

I found that by resting the lower part of the wheel I had a clear hold on the wheel and could move the spokes from left to right. I also was able to polish part of the spokes’ rear by moving the polishing wheel in between the spokes. I had a firm grip on the wheel while holding it and resting my palm on the machine polisher.

Be careful to not accidentally rub the rims and remove part of the anodized aluminium.

Since some of the machine polisher’s cutting compound can stick on the spokes, I used an abrasive liquid cleaner on a sponge to clean them as a last step. Here’s the end result.

And that’s how you clean and polish bicycle spokes! If you like this article give it a thumbs up. If you have any questions or suggestions for new articles, let me know in the comments below. Cheers.