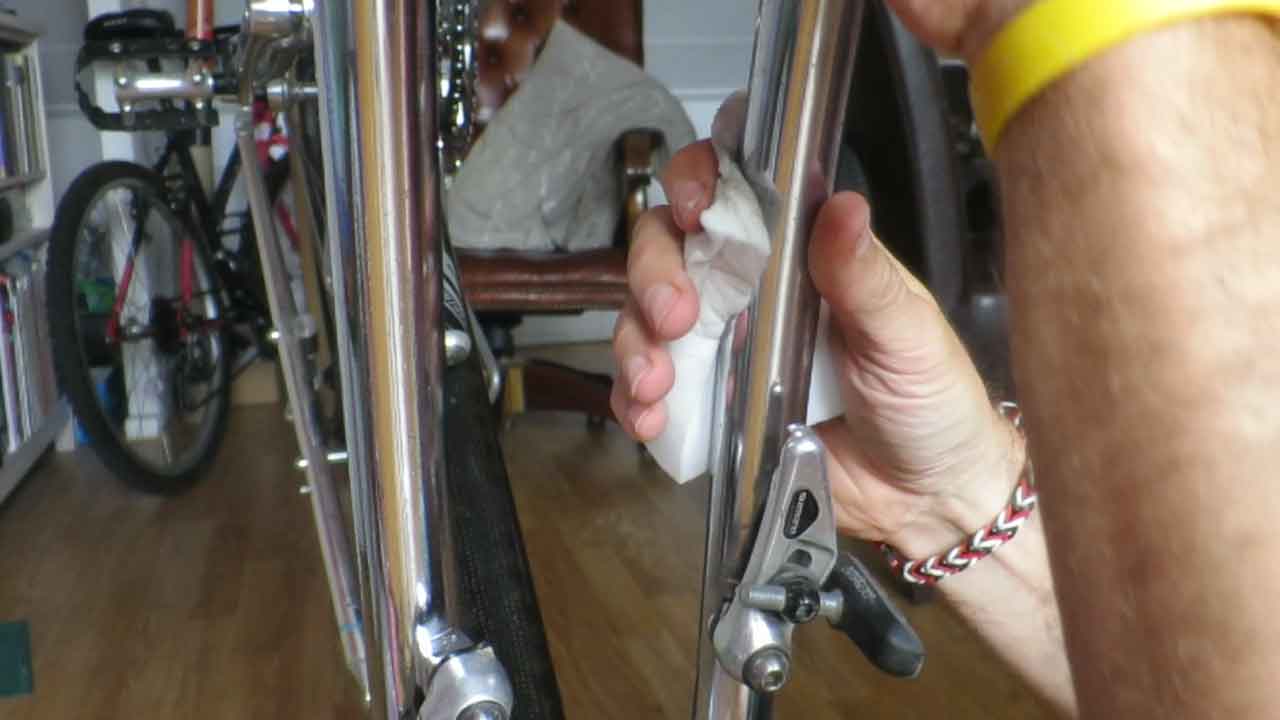 In this article I’m going to explain how to polish bicycle chrome. The chrome on the steel fork of my Koga Miyata Skyrunner has rust pits on them, one more than the other, and especially on the inside of the fork.

Chrome is a thin layer that serves both as protection against corrosion and as a decorative element.

Chrome is achieved through a process called chrome plating, where a thin layer of chromium attaches itself to a surface via electroplating.

Dull chrome can be polished to regain its former mirror-like characteristic. Because the dulness is caused by tiny scratches which decreases the chrome’s ability to reflect light.

Damaged chrome is usually caused when metal corrosion underneath the chrome pushes through the chrome layer. Early symptoms are chrome pits and in worst-case scenarios corrosion causes the chrome to detach itself from the metal, crack and flake.

Damaged chrome can not be easily repaired. Theoretically, with the right equipment you can perform a chrome-plating procedure yourself, but I definitely consider it on the extreme side of bike restoration projects.

I decided to try and clean it with lemon juice. The lemon juice is supposed to dissolve the rust, making it easier to remove afterwards.

I tried it for about an hour and didn’t really feel that it added anything besides me simply rubbing the rust of the fork. It’s also sticky. So I don’t recommend this process to remove rust and polish bicycle chrome.

I then decided to buy Mr. Clean Magic Eraser sponges to see where that would get me.

I put a little water on the sponge before rubbing the chrome fork. A quick tip is to remove the wheel so you have better access to the inside of the fork.

The immediate benefit of using a magic eraser to polish bicycle chrome is that it has a good cleaning effect without damaging or scratching the chrome. The last thing you want to see happening is your vintage bike parts becoming dull.

It’s not that effective in removing the rust pits. So you’ll still have to use the old-fashioned way of simply sliding your nails over them.

You can clearly see the difference between a polished chrome fork and one that still needs to be done. But using the magic eraser is not the same as sanding and polishing aluminium.

I’m unsure if such a process can even be done, because I don’t know if the chrome is thick enough to withstand a sanding step. And I’m not going to try and find out on such a rare bicycle part.

So all in all the final result is not really what I was hoping for considering my experience with a polishing wheel, but I do think this is a safe way to polish bicycle chrome and get a marked improvement.