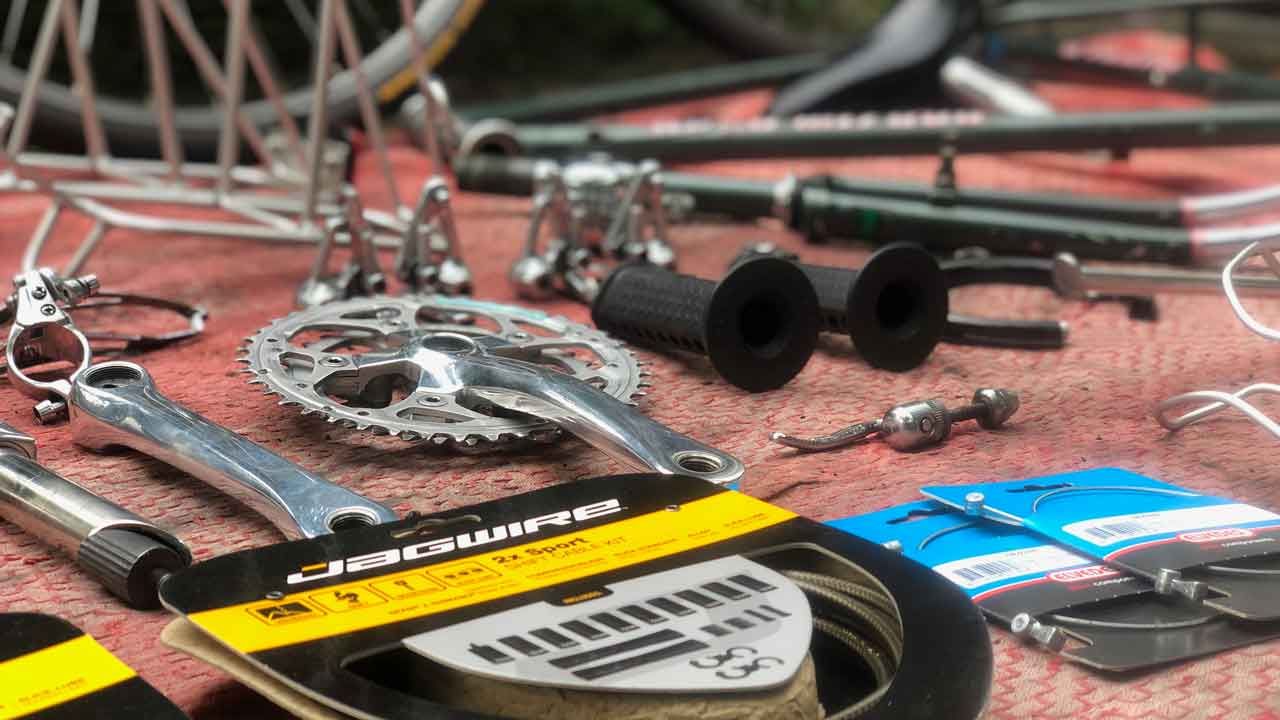 In this article I will give you the best 5 bicycle restoration tips I wish I knew before I started my first bike restoration project.

I hope it will save you valuable time and money and increase the enjoyment out of riding a bike you’ve restored yourself and the bike restoration process itself.

Tip 1. Fixing a bike vs. riding a fixed bike

I take great enjoyment out of riding a bike I fixed. But I have taken on some very daunting bike restoration projects. This meant I’ve spent months on a bike before any riding ever took place.

Sanding and spraying a frame, sourcing periodic-correct parts, complex bicycle repairs; a bike restoration can be both time-consuming and a sometimes a pure test of willpower.

And sometimes you can only find the answer to this question by actually starting it.

I started out wanting to fix every bike, which needed to be fixed. And my first restoration project was an abandoned mountain bike during a holiday: a B’TWIN Rockrider 340.

It was quickly followed by a second one (1990 Scott Town XC) I found a couple of days later.

But simply because I don’t have the space to keep all those bicycles I was forced to re-evaluate what projects were worthy enough to pick up.

I either sold or gave away a great number of bikes. This led me to be more picky and focus on quality more than quantity.

I started being very budget-minded and trying to reuse every conceivable part.

However I gradually moved into upgrading (worn) parts to achieve the ultimate riding experience, instead of just simply having fixed a bike.

And doing that with less bikes meant I was willing to spend more money per bike.

Tip 3. Be willing to spend money

Being willing to spend money on something I’m going to use and maximising the final riding experience is my goal.

The price of entry into bicycle restorations is quite high. Not only do you have to pay for a number of parts, which are almost always unusable (like a worn chain and cassette). You also have to pay for specialty tools to perform the repairs yourself.

I’ve written an entire article on the subject of bike restoration costs. Not only did I spend on average around €500 per bike. I’ve also spent hundreds of euros on tools for bicycle repairs.

Tip 4. Avoid taking on a too ambitious bike restoration project

I also less underestimated the fact that with every project you will run into unforeseen issues (like a handlebar being cut way too short). These issues will need time and money to overcome.

It was something I was unable to spot based on the photos of their respective listings and because the other owners failed to mention them.

A good type of bike to start with would be either a road bike or a rigid mountain bike (no suspension).

These bikes don’t have tricky lighting to set up, complex front- and rear suspension, fenders, racks, chain guards, and locks.

They are the simplest of bicycles which will teach you the basics of bike restorations and bike repairs like:

Tip 5. Be humble enough to ask for help

I’ve written over a hundred articles on the subject of bike restoration and spent countless hours researching bikes, parts, and tutorials. But I’m the first to admit I’m not the best bicycle mechanic you’ll find, far from it.

More than once I went to my LBS to ask for help and created a relationship with them where they almost always help me for free in exchange for the occasional case of beer.

The guy who runs the shop and has been in the business for 25 years simply knows far more than I do. And the ease with which he fixes something in 5 minutes which will take me half an hour is something I can only admire.

And I’m fine with it. For me it’s a hobby, for him it’s the thing that pays his mortgage, so he’s supposed to outperform me on every level.

I hope these 5 bicycle restoration tips will provide you with the information to make better choices than I’ve made in the past.

My remarks about taking on more than you could handle notwithstanding, restoring and riding a bicycle that was left for dead is an incredibly rewarding experience.

It’ll help you to not only grow your skills in restoring bicycles but also be more open-minded towards your own abilities to overcome challenges in other areas. It changes the way you look at problems and approach them with a willingness to move forward when facing adversity.

And that wraps up my article about the 5 best bicycle restoration tips.