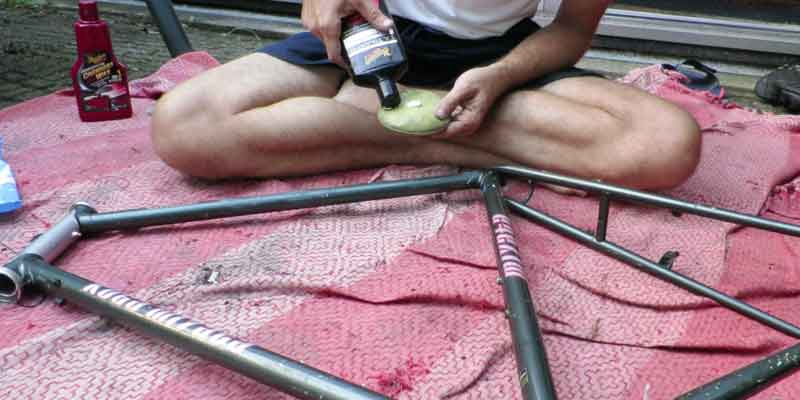 I’ve recently bought a Koga Miyata Adventure from 1986. And as always, it involves much more work than one might think at first glance.

The first step is disassembling the bike so you can get to the naked frame. Next up is cleaning the bike. Then you have to rust as well as you can. And the last part is restoring the frame paint.

Because bicycle detailing involves a lot of cleaning, it’s much easier to do so on the frame alone than with all the parts attached. Also removing rust, for instance from your bottom bracket, can only be done with the part removed. That’s why the first step in a thorough bicycle detailing is disassembling it entirely.

One of my favourite parts of any bike restoration project is cleaning the frame. In general the projects I pickup are bikes that have never seen any cleaning for decades. And in those years layers of gunk will pile up on top of each other. Sometimes half an inch thick.

This part can’t be done thoroughly enough if you ask me. The last thing you want is to smear old grease all over your frame once you start polishing it.

Also, as you can see in the Instagram post, a lot of the time both the bearings as well as the bearing races are covered in dried-up grease and rust. This will have to be totally removed before reassembling.

There isn’t a real strategy involved in cleaning a bicycle frame. I don’t use paint thinner like I do in, for instance, cleaning a drivetrain. A bicycle frame isn’t a small object, and you have to be careful working around the decals anyway, and not damage them in the cleaning process.

Any bicycle that needs a proper restoration probably has some rust that needs to be removed as well. A lot of old bikes have steel frames and everywhere where the paint has been nicked, rust will rear its ugly head.

My preferred way of removing rust is with the help of a rust remover. Using steel wool or tin foil on a frame is a bad idea for removing rust since it damages the paint. Rust remover can damage the paint as well if the concentration is too high.

In the case of the removed bottom bracket I dipped the entire lower part of the shell into my salad bowled filled with the stuff and let it sit for 2 days. After I didn’t notice any damage on the paint I proceeded with other parts of the frame. My apologies for the low quality of the picture. I had to perform this operation inside in bad lighting.

The most fun step of bicycle detailing is polishing the frame if you ask me. It’s the step where you really put back some of the luster into the paint job.

I’ve written another article about polishing a bicycle frame where I go into using Meguiar’s Ultimate Compound and Meguiar’s Deep Crystal Carnauba Wax to really bring back the high-gloss of your frame.

This frame was pretty beat up. The previous owner(s) had used cable locks. And I know for sure it had been used as a commuter bike and been parked at the local station for quite some time. This meant the frame had deep scratches on the top tube and, seat tube and bottom tube.

First up you need the cutting compound to remove the scratches before applying the frame polish. A cutting compound serves as a kind of liquid sand paper, with the equivalent of the grit running in the thousands.

A cutting compound actually removes part of the top coat of the paint to smooth out the surface and bring back the initial shine.

You can get them all out if you just work hard enough. I hand polish the entire frame. And to really get the result I’m after, I pick up the frame and wring it like a wet towel with a Meguiar’s Foam Applicator Pad in between my hand and the frame. By rotating the frame with one hand and my hand with the other I can exert quite some force.

After you’ve smoothed out the the top coat, it’s time to polish and protect it with a wax. A wax will intensify the richness of the frame’s paint by applying a thin layer which will smooth out the service even more, after you’ve used the cutting compound. Meaning it’ll reflect sunlight better and increase the original luster to the paint. It’s incredible how relatively easy it is to restore paint this way.

And that’s how a proper bicycle detailing is done! If you like this article give it a thumbs up. If you have any questions or suggestions for new articles, let me know in the comments below. Cheers.