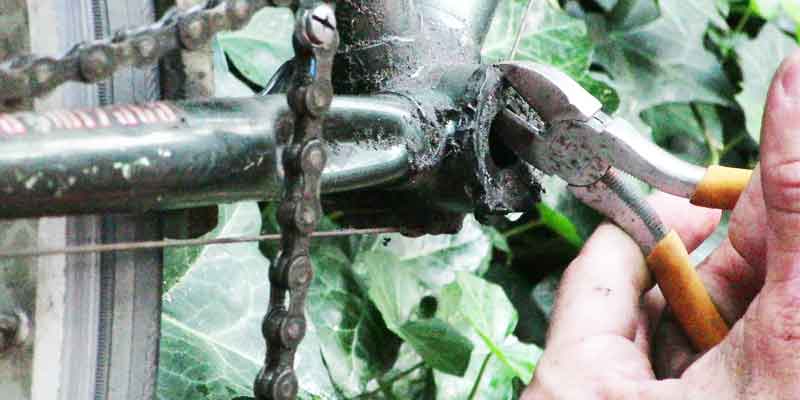 In this article we’re going to dive deeper into removing a stuck plastic bottom bracket cup.

One of the most common restoration steps is removing a seized or frozen bottom bracket. Bikes which have been sitting around for decades and never been properly serviced are bound to have bottom brackets with moderate to severe corrosion issues.

I don’t know the bottom bracket type we’re going to discuss in this article. As you can see from the Instagram post, it was so rusted the part where normally the type would be was covered in the stuff. I could still make out the length of the spindle (131mm) and width of the shell (60mm).

The cups of these bottom brackets are a true nightmare. They are plastic and have a mere 6 shallow notches where a bottom bracket tool goes in. In my case that would be the Park Tool Bottom Bracket Tool BBT-4.

Getting to the stuck plastic bottom bracket cup

Before you can actually start and try to remove a bottom bracket, you’ll have to remove the crankset. How to remove a crankset is covered in another article.

One of the key elements of removing a stuck plastic bottom bracket cup is that your hold on the cup is as good as can be.

These plastic bottom bracket cups are extremely easily damaged. And the more damage you incur, the more likely it’s going to be that you’ll lose your hold on the cup, increasing the risk of even more damage and ruining the cup.

You can use anything to fix the bottom bracket tool in place. In my case I use a very large washer, another bottom bracket removal tool, and the original crank bolt.

With the bottom bracket tool in place you can start to apply force. As always start slow and increase the force exerted on the cup.

Make sure the tool is optimally engaged with the notches on the plastic bottom bracket cup at all times. Check for play. If there is any, tighten the crank bolt accordingly.

As you loosen the cup, the crank bolt will tighten itself. When you feel the plastic bottom bracket cup loosening, check again if the crank bolt is not too tight. You don’t want to strip the threads.

Another benefit of a tightened crank bolt tool is that you can use two hands without the risk of the tool slipping of the notches and damaging them.

Give it a couple of firm taps. And make very sure the bottom bracket tool is still firmly tightened before doing so.

Using a pipe for extra leverage

If it still won’t come up I have a pipe that I slip on the bottom bracket tool to be able to have more leverage.

In my case the bottom bracket cup was so seized I simply wore out the notches until there was nothing left. If that’s the case you will no longer be able to use the cup and need to proceed with the next steps to remove it.

Since this type of bottom brackets has loose cups you can tap out the spindle with a hammer. Doing so will provide you with easier access to the damaged bottom bracket cup.

Under all circumstances avoid damaging the threaded part of your frame’s bottom bracket shell! If you do you can ruin the entire frame!

You need to “soften” the hard plastic shell of the plastic bottom bracket cup. You can’t simply pry it out with the threaded part all intact. A good place to start is to cut away at the notched part with flush cut pliers.

Flush cut pliers give you relatively fine control over which area you’re targeting.

You can use utility pliers to have a good grip on the bottom bracket cup and start pulling it away from the frame. The idea is to loosen the threaded part of the cup from the actual threads of the frame that hold it.

Next step is to use a flat head screwdriver and tap it into the shell, prying pieces of it loose from the rest of the cup. By moving inwards at an angle you’ll reveal the part where the threads of the cup start.

A last resort would be to use a hack saw. When doing so be extremely careful not to damage the threads. This is done very easily so be careful. Use this method to weaken the cup, not go through it entirely. Weakening the cup means you can bend and pry it loose from its threads more easily.

And that’s how you remove a stuck plastic bottom bracket cup!