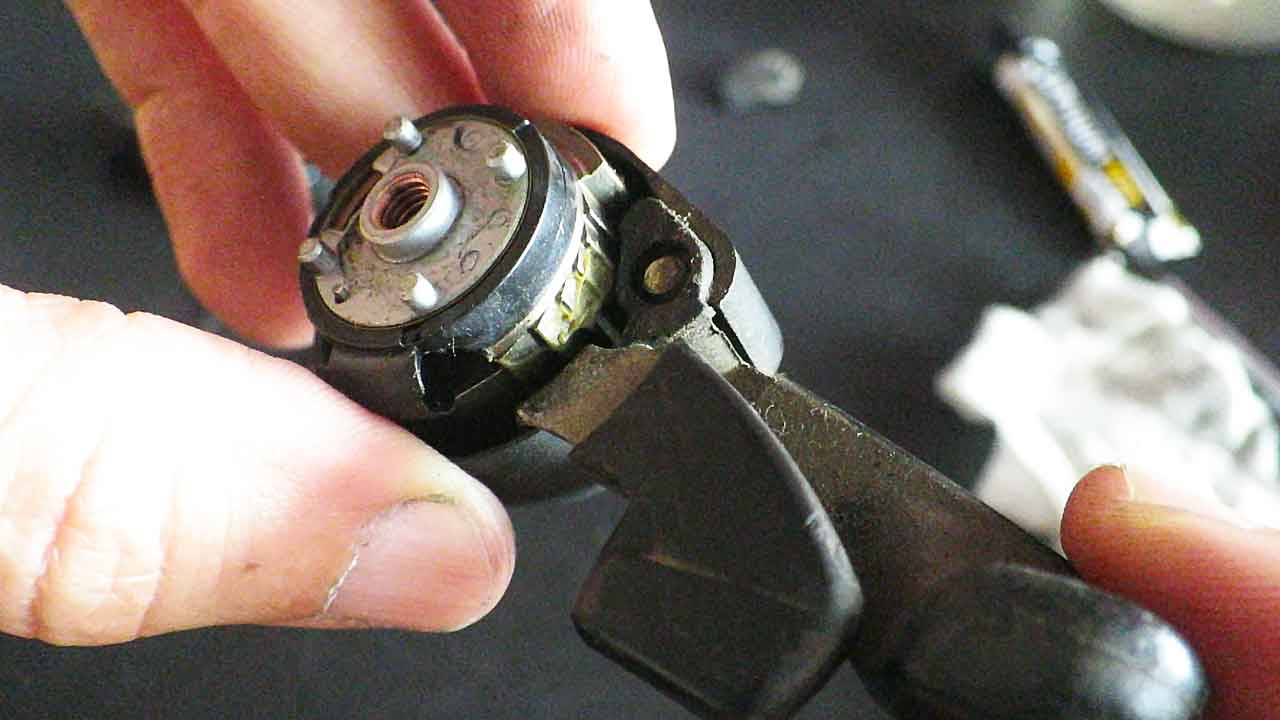 In this article I’m going to explain how to fix sticky MTB shifters. In this case Deore XT STI shifters from 1991.

MTB shifters work with a ratchet mechanism and are lubricated using a thicker lithium grease. A tiny spring makes sure the ratchet pawl keeps applying force on the ratchet wheel.

But over time the grease totally dries and keeps the pawl from returning. The symptom is a loose shifter that won’t shift anymore.

I had this problem before with another bike. I solved it by painstakingly cleaning and lubricating the shifter. This time I tried a more brute force approach, which I consider to be a much more effective solution to this problem.

I’m going to do both shifters. Though the shifters are obviously different left and right, the process is the same.

A word of warning

Before we start I want to make very clear that a shifter mechanism is an extremely delicate mechanism. It was never intended to be disassembled, not even by a bike mechanic.

My LBS supported this notion and stressed to never take the mechanism apart, because it will be impossible to reassemble it again if you do.

The first thing you need to do is remove the shifter and its housing. The shifter is bolted onto the brake levers and can be removed with the help of an allen key.

You’ll need to loosen the shifter cable as well or else you won’t be able to perform this repair, because the shifter will stay attached to the bicycle. Since I’ll be replacing the cable anyway, I simply cut it and remove the entire shifter.

The shifter has a number of screws. One is to remove a part of the housing so you can replace the cable by pressing it out of the shifter housing.

The other two screw the housing into the place.

With the entire housing gone it’s also easy to remove the cable. The yellow residue on the shifter is the gummed up grease that’ll need to be removed.

Both shifters have small plastic rings that can break very easily, possibly ruining the shifter. Be very careful at this step. And don’t operate the shifter without it’s housing!

The go-to solution for fixing sticky MTB shifters is to basically spray an entire can of WD-40 into it. WD-40 dissolves the old grease and put a slight film of new grease into the shifter.

But WD-40 is expensive and doesn’t get everywhere you’d like it to since the shifter is a sealed mechanism. So I decided to submerge the sticky MTB shifter entirely into a small jar filled with white spirit.

White spirit is a much stronger and much cheaper degreaser. And since there’s no rubber in a shifter, it can’t damage any parts.

I use white spirit to clean a lot of bicycle parts and always reuse it. Since a shifter is much more delicate than say a crank, I use clean white spirit in this case. I don’t want any crud getting into the mechanism.

You can either put the sticky MTB shifters into the jar and swirl it, or swirl the shifter instead. After a couple of minutes the grease will be gone.

By comparing the white spirit afterwards you can actually see the amount of crap that’s coming out of your shifter.

Before you re-grease the shifter, make sure the majority of the white spirit is gone. Either by wiping it from the shifter and shifter housing, and / or blowing it out.

You can either put new lithium grease on the shifter, ratchet and pawl or a bit of sewing machine oil.

Put it all back together and use the shifter a couple dozen times to make sure the grease goes everywhere it’s supposed to go.

And that’s how you fix sticky MTB shifters.