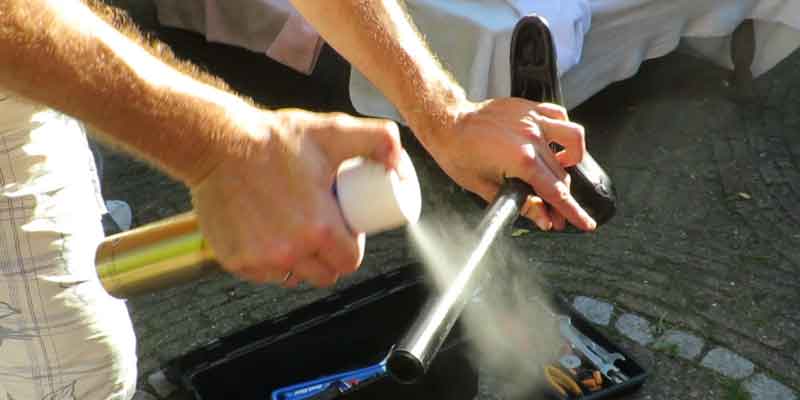 But if there’s one thing that’s a nuisance then it’s a slipping seat post. And since my Cannondale M300 had exactly this issue, it was the perfect opportunity to fix it and write about it. Especially because there are only a handful of steps involved.

If you don’t like the video or need more instructions, then continue reading.

A slipping seat post problem can be because of a number of issues.

That’s why we need to remove both the seat post (with saddle) and the clamp to make sure we fix this.

The seat post clamp is an area where a lot of dirt accumulates on bikes without fenders. This dirt can cause corrosion to the clamp and lever mechanism.

The dirt itself can wedge itself between the top of the seat tube and clamp, and between the lever and clamp, compromising its functionality even further.

That’s why you need to clean all of the parts of the clamp. The clamp itself. And the entire lever. Which is made up of several parts. A screw with the lever attached to it. A bolt for the otherside. And possible multiple washers in between.

Remove all dirt and corrosion as best as you can. Lube the lever with a drop of oil. Put a bit of grease at the end of the screw. And put it all back together.

Also make sure to clean the area where the seat post clamp goes on top of the frame. Any piece of dirt between the seat tube and the clamp negatively impacts its ability to tighten the seat post.

Finish this step by correctly installing the seat post clamp. Make sure the incisions at the back of both the clamp and the seat post align.

Step 3: Clean seat post and inside of seat tube

Step 4: Use hair spray to prevent the seat post slipping down

If the seat post is long enough you can apply grease to the top of the seat post only, about halfway. The application of grease will prevent further corrosion.

You can spray the bottom halve with hair spray. If you can, make sure to use anhydrous hair spray. This basically means the hair spray does not contain water, so it doesn’t corrode the seat post.

Insert the seat post into the seat tube before it dries. This will create a non-corrosive sticky substance. The grease at the top prevents water from seeping in whereas the hair spray at the bottom increases the seat post’s friction.

Close the lever of the seat post clamp correctly. To do so it should move almost freely until it has a 90 degree angle with the seat post. Afterwards you should use the palm of your hand to move it towards the clamp.

If this process necessitates too much force, it means you’ve overtightened the clamp.