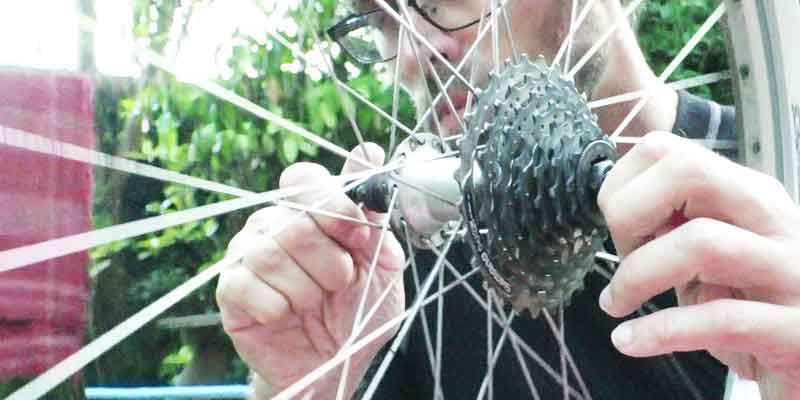 In this article I’m going to explain how to fix play in rear bicycle wheel. I’m not going to disassemble and overhaul the entire rear hub. Fixing play in a bicycle wheel can be done in minutes, where overhauling and servicing an entire hub might include replacing either the cones, the bearings, or both.

In this case, I wanted to ride on my Cannondale M300. When I restored this bicycle the rear hub on the none drive-side showed signs of rust. Water had seeped in and had wreaked havoc on the cone and bearings.

I replaced both, but at the time I didn’t have a cone wrench, which is a tool with which to hold the cone in place while you tighten another nut against it. So I simply tightened it by hand and put it back in the frame. This was a sure recipe for the cone to get loose and indeed it did, resulting in the play in the rear wheel.

The trick is too tighten the cone in such a way that there isn’t any play and minimal pressure against the bearings. I will use the cone on the non drive side because it’s much easier to reach, and you only reach on cone to remove the play. It will take some back and forth between tightening the wheel, feeling if there is any play and spinning the wheel.

If you hold the will with the axle you can simply feel if the wheel rotates freely. Take into consideration if the bearings and / or cone and bearing race are damaged. If so there’s no way you will not feel a sort of grinding vibration coming through the axle.

Making sure the cone doesn’t get loose

To prevent the cone from moving and reintroducing play in the rear bicycle wheel, there is another nut you can tighten against the cone. I use an adjustable wrench for this besides the cone wrench. After you’ve done this, you’ve removed the play and can put the wheel back into the frame.

If you like this article give it a thumbs up. If you have any questions or suggestions for new articles, let me know in the comments below. Cheers.