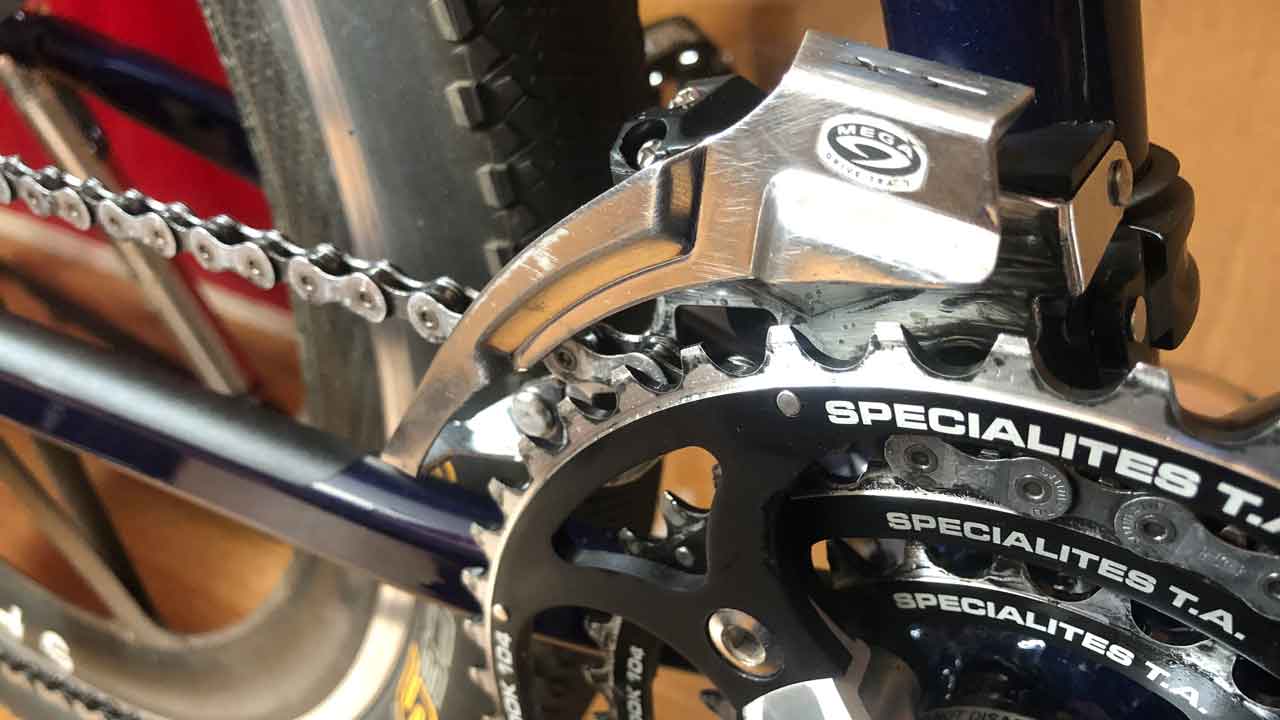 In this article I’m going to explain how to fix a front derailleur not shifting to highest gear.

I recently installed a Hollowtech II crankset with new chainrings. I went from a 42 teeth to a 46 teeth outer ring, which meant I had to change the front derailleur as well.

This was because the bigger chainring forced the derailleur to sit higher on the down tube. And this would not be possible with my current E-type front derailleur mount.

So I bought the exact same Shimano FD-M770 front derailleur with a seat tube mount. This of course means I would need to correctly setup and configure the front derailleur, so it’ll shift properly.

Since I had to remove the chain anyway, and renewed the chainrings, I took the opportunity to extensively clean both the chain and bottom bracket.

The first thing I needed to do was to put the front derailleur in the correct position.

This involves placing the front derailleur on the bike in such a way that the derailleur cage sits correctly with respect to the outer chainring and chain.

The derailleur cage has a curve that roughly follows the curve of the chainring. When looking directly at the crank from the side the lower part of the derailleur cage should be positioned 2 mm. above the outer ring.

And incorrect placement may result in the cage moving against the teeth of the middle ring. You’ll know this is the case if you here a rattling sound.

Step between middle- and outer chainring too small

What can also happen is that the upper part of the cage connects with the chain. Because this part of the chain sits on the ring it will not shift because the chainring teeth are sitting in the chain and keep it in place.

I’ve had this happen because the gap between the middle and outer ring was too small (36 vs 42 teeth). So a good rule of thumb is to have a minimum step of 10 teeth between rings, so the gap in between is big enough.

The derailleur cage needs to run in the same direction as the chainrings. An easy way to test if this is the case is to look at it from the top.

Another way you can test this is to pull the derailleur cage by hand onto the outer chainring and see if it follows it correctly.

There are two screws on top of both derailleurs including the one at the front. These screws are called limit screws, and determine the rotational angle of the derailleur linkage system, thus how far the derailleur cage can move towards and away from the frame.

Unscrewing the screws means the angle gets bigger and the cage can move further. The screw closest to the frame, or the one with the H, which stands for “high” gear, determines how far the cage can move outwards.

If the H screw is tightened too much the derailleur cage cannot move outwards enough. And if the cage can’t move enough, the chain it pushes won’t move enough as well and won’t go onto the outer chainring.

I usually untighten the H screw so the derailleur cage isn’t limited at all. This way I can test the configuration of the drivetrain without it being hampered by the limit screw.

If I’m happy with the configuration I tighten the screw until it starts to negatively impair shifting to the outer ring. I then loosen the screw a bit and know the screw is as tight as can be so the chain will never be forced of the outer ring while shifting.

Since I don’t have a very expensive cable stretcher I simply use pliers to keep the cable in place while tightening the bolt.

It’s very hard if not impossible to finetune a front derailleur without using the barrel adjuster located between the shifter and the shifter cable.

The barrel adjuster can push the cable housing away from the shifter. Because the cable stays in the same place this means the cable is pulled taut more.

Usually with the initial setup the cable still has some slack. That’s why I always tighten the barrel adjuster until it sits against the shifter. This way I can remove the cable slack that remains, with a couple of turns and never run out of room.

If you’ve been in a crash and you find the front derailleur not working correctly, it might be worth checking if one or more of your chainring teeth are bent.

I’ve written a separate article about how to fix bent chainring teeth. Suffice to say that fixing this should improve your ability to shift to another chainring.

Concluding remarks about front derailleur not shifting to highest gear

Shifting issues are amongst the most annoying issues that can ruin how your experience your ride.

No matter how well I configure the front derailleur, almost always the final touches are done with the barrel adjuster while actually riding the bike.

This bike now has a front derailleur with impeccable shifting characteristics. I hope you’ll be able to achieve the same for your ride.