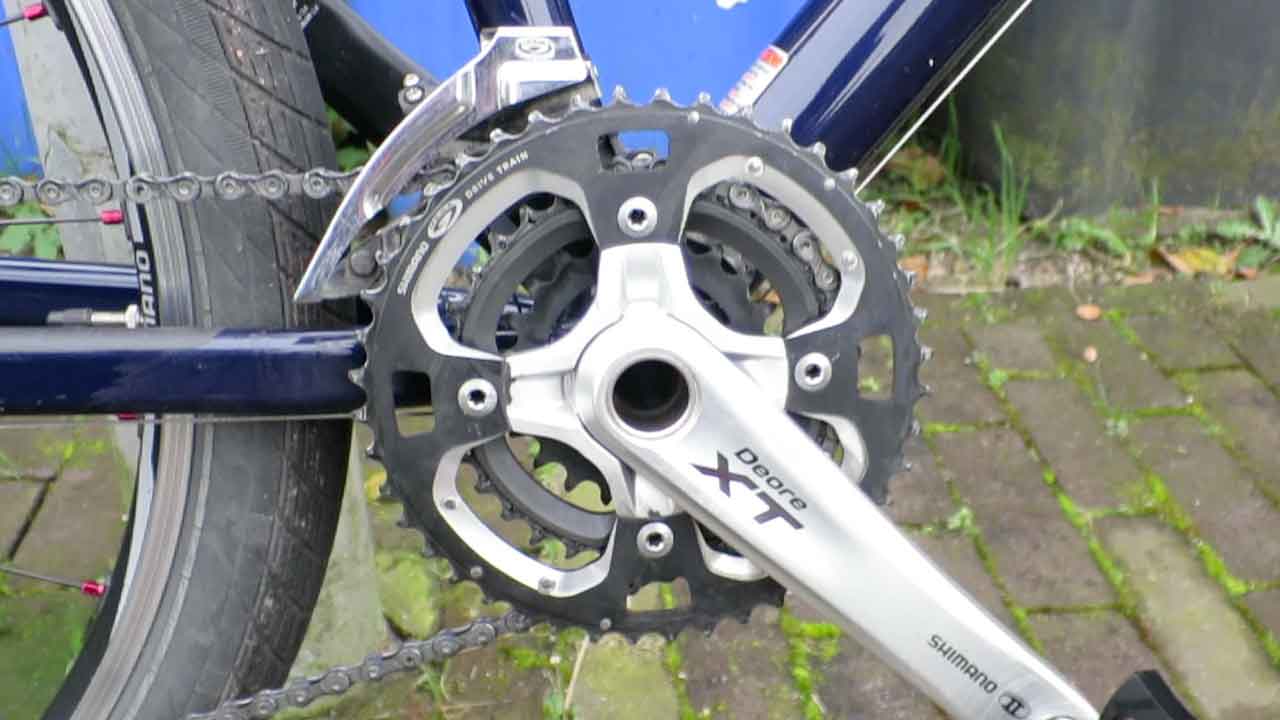 In this article I’m going to fix a front derailleur not shifting to big ring, or at least not shifting smoothly.

Of course, it could also just be me. So let’s get started and see what I’ve got on my hands this time.

The derailleur in question is a 2009 Deore XT version. Technically speaking that’s not a very retro groupset to be featured on a bike restoration website, if not for the fact that it sits on a 1998 Cannondale Killer V 800.

Basically the bike has been stripped of almost all parts, except for the the frame, front suspension, headset, handlebars and seat post. The rest has been upgraded including a complete new Deore XT drivetrain.

I know the person I bought it from installed the derailleurs himself. I already saw this isn’t the only issue with the bike. The overall installation of parts feels rather sloppy, so I’m not really surprised this issue with the front derailleur.

When you try to fix a Front derailleur not shifting to big ring, there are a number of place you can look. And that’s exactly what I did.

I first put the barrel adjuster back into the shifter unit as far as it would go before turning it a single rotation.

A barrel adjuster can apply a tiny bit of extra tension on the cable by rotating it counterclockwise (or releasing tension by doing the opposite). So this method is used to do final finetuning when overall the shifting is working.

The limit screws restrict the movement of the derailleur so it can’t move the chain into a position where there is no cog. They are usually labelled with a tiny letter ‘H’ and a tiny letter ‘L’ for HIGH and LOW.

To prevent a front derailleur from not shifting to the smallest and largest rings I turn the screws all the way up. That means there’s no restriction at all. I can set the limit later on.

When the front derailleur isn’t connected to the shifter, it’s in a position closest to the frame. E.g. it sits on the smallest ring of your crankset. When shifting the chain moves ever so slightly within the derailleur cage. To know what the maximum position of the derailleur needs to be, you need to shift the chain to the lowest gear (biggest sprocket in the rear).

From this position you can tighten the cable using either a cable stretcher, which is very expensive and I don’t have, or by hand.

What I do is push the derailleur outwards and away from the frame and keep the cable in place while a bolt it into place. This works fine but is obviously not as accurate and easy as the cable stretcher.

With this setup in place I thought the issue of incorrect shifting would be over. It wasn’t. And though this type of stuff should be easy to do yourself, once again I found myself at the short end of the stick.

So what if your derailleur still doesn’t shift. Couple of things:

My advice would be to watch Park Tool’s video for more information.

The list above details pretty obvious issues. It’s very hard to miss a bent chainring, chainring wear, or wacky front derailleurs and gummy cables. None of these was the problem I was experiencing.

And then I looked at the front derailleur mount. Unlike the mounts I was used to I had a front derailleur bottom bracket mount. I’d never seen such a thing before and those mounts are only necessary on frames that have rear suspension and don’t support more standard round clamps that go onto the seat tube.

The thing with this mount was that you could easily push it from side to side and there seemed to be a couple of millimeters between the seat tube and the mount, while it looked it should be flush against the frame.

Fix for front derailleur not shifting to big ring

In the end I put a piece of rubber in between the seat tube and the mount and taped it in place with insulation tape. My troubles we’re over immediately. So the derailleur was always in the wrong position right from the start.

Would a seat tube round clamp version not have this issue? I don’t know. Is the bottom bracket mount bent or incompatible with this frame? I don’t know. I just know this fixed the front derailleur not shifting to big ring and in the end that’s what I needed.