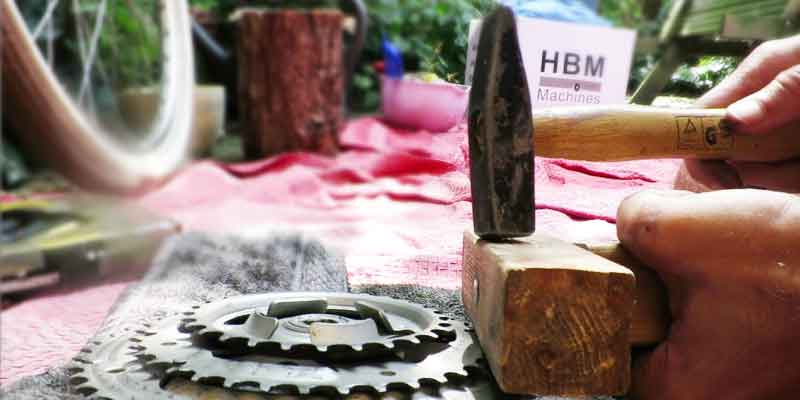 After you’ve read this article you know how to fix bent chainring teeth, no matter what chainring they’re on. Although I performed this procedure at home and removed the entire crankset you can also fix your chainring while on the road. You can do this with the crankset on the bicycle.

In my case they we’re on the middle chainring of a triple crankset which was riveted. So there was no way for me to remove just the faulty chainring and perform the fix.

What causes chainring teeth to bend?

Bent chainring teeth can be caused by a number of things. And normally they occur on the biggest chainring since its teeth are most exposed. If you don’t have a bash guard (old mtb’s like mine don’t) anything that impacts your crank is bound to impact the teeth on the biggest ring. A log, a rock, anything you try to get over while riding.

I had bent chainring teeth on the middle chainring and couldn’t remember any accidents. So they must have come because of bad shifting. Since I had done some mountain bike trails with this bike which was detrimental to the drivetrain, this must’ve been the cause.

The teeth we’re bent towards the frame. This meant that I tried to move to the granny ring (smallest chainring) before a very steep climb. I had replaced the mtb crank with a touring crank (bigger rings) so I frequently had to use the smallest ring to finish climbs. With a front-derailleur not shifting correctly and the chain in between rings, a massive amount of force was exerted on 3 teeth, causing them to bent.

Something I didn’t realize at the time since I only felt a sudden twang go through the chain with each rotation while riding in sixth or seventh gear (of my 7-speed).

How do you know you’re going to need to fix bent chainring teeth?

A tell-tail sign of bent chainring teeth is the fact that your shifting doesn’t work as it should.

Upon inspecting the crank I found out 3 of the teeth were bent. How much they we’re bent could clearly be seen by how much the chain moved within the front derailleur cage. When the chain is on the part of the chainring which is bent the chain moved towards the inside of the cage.

When I looked at the chainring teeth when the chain moved in the derailleur cage I’d located the bad ones. I decided a hammer and a piece of wood we’re my best options.

The easiest way to start hammering on the crankset is without it being on the bike. This is difficult when you’re on the trail and you’ll have to make do if that’s the case.

Removing a crankset is not part of this tutorial, so I’ll skip over the specific details on how to do that. Suffice to say I got the crank off so I could proceed with the next step.

I placed the chainring on a towel. There’s a piece of plastic at the front and I definitely didn’t want to crack it while hammering on the other side.

I’ve used the piece of wood I’m holding in the photo basically every time I need to hammer something but don’t directly want to impact the surface. It’s actually a post for a DIY marble track I made for my daughter. But I found the fact that you can hold it the way I do extremely practical for these type of bike repairs.

You basically tap away at the bent part. Start slow with relatively gentle taps. Make sure the crank is protected enough on the underside. And inspect the teeth after 1 to 3 taps.

I found that by holding the wooden punch at an angle I could easily single out a tooth I wanted to tap.

At a certain moment I didn’t notice anything markedly different about the now straight chainring teeth. So the crank went back on the bike for one last inspection. I didn’t saw the chain moving within the derailleur cage. One test ride later and the shifting worked perfectly again 🙂

And that’s how you fix bent chainring teeth! If you like this article give it a thumbs up. If you have any questions or suggestions for new articles, let me know in the comments below. Cheers.