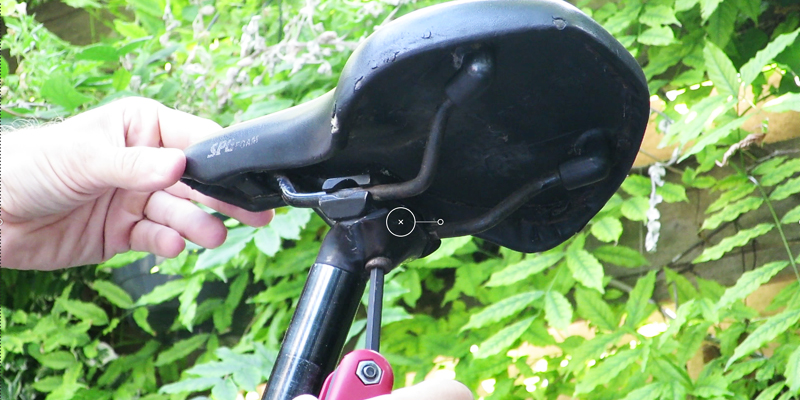 In this article I’m going to dive into the correct bike saddle angle. It’s a small but very important subject considering the fact that it’s one of three areas where your body makes contact with your bike, the other ones being the grips and pedals.

While I was riding my Cannondale M300 I heard a soft pang and felt the saddle move. Afterwards, the seating position was let’s say… less comfortable.

Older city bikes, children’s bikes and cheap current bikes use a system with a bolt on either side. Tightening these bolts results in the saddle clamp being pressing on the individual rails of the saddle. Obtaining the correct bike saddle angle can be done because the bolts press on washers which are slotted into each other.

This system of tightening the saddle is the worst there is if you ask me. Simply because their staying power is the lowest. The Brooks B130 on my Azor Heavy Duty has very often popped out of its position, no matter how hard it seemed I tightened the bolt. And the serrations on the seat post saddle clamp are pretty course, which prevents fine-tuning your saddle angle adjustment.

These seat posts saddle clamps also only come in steel versions as far as I know. So they’re very prone to rusting.

Seat posts found on more premium, sports, mountain, and racing bikes are called micro-adjust seat posts. They have only one bolt which goes through the seat post itself and tightens a bolt which sits just below the saddle. Tightening the bolt drives down a clamp on top of the saddle rails.

These type of seat posts are far more user-friendly to adjust, come in other versions than just steel (aluminium, titanium and carbon), and provide more fine-grained control over the bike saddle angle.

What is a correct bike saddle angle?

I always thought the correct bike saddle angle was zero percent, meaning totally horizontal. With the tip of the saddle at the same height as the rear. That being said, because some bike saddles have a slightly curved top, the angle actually will be one or two percent with those two extremities at the same height.

I now believe that should perform a couple of trial-and-error angles to actually find out when you sit on the rear end of the saddle and it feels comfortable.

It doesn’t make a lot of sense when you set the correct angle according to theory, but your saddle still sits totally awful.

I did this with my Brooks B130, but as it turned out the saddle needed to be tilted backwards much more to keep my from sliding forward. I could’ve never guessed this just by following some theory.

And I believe this goes for any saddle. Start off horizontally, sit on it and see if it needs any adjustment. If you think the saddle is fine and you don’t get a sore bum, who am I to think differenly.

Where should the seat post be clamped on the rails?

Some saddle rails actually have measurements on the rails. Now I’m no professional competitor in cycling but I feel that micro-adjusting on this level is absolute nonsense.

If you place the saddle post anywhere else but the middle of the saddle, chances are your frame measurements are of and you should ride another bike. It means that you’re either to far away or to close to the handlebars with the bike’s normal setup. E.g. you’re upper body is either too large or too small for the frame geometry.

Does saddle quality impacts what the correct bike saddle angle should be?

No. Saddle quality has nothing to do with the correct bike saddle angle. Unless the quality is so low the saddle actually loses its shape when you sit on it.

The wear on the saddle also isn’t important in any way. An angle is an angle. One of my favorite saddles is my Scott Town XC’s Selle Italia Criterium. It has definitely seen better days, but it’s a astounding to learn that a saddle in this type of condition sits so wonderful. In the end each saddle is different.

Once you know your correct bike saddle angle, do they apply for all saddles?

No, especially leather Brooks saddles need to be tilted backwards more. Their saddle decks are very prone to stretching and sagging.

And that’s how you set the correct bike saddle angle! If you like this article give it a thumbs up. If you have any questions or suggestions for new articles, let me know in the comments below. Cheers.