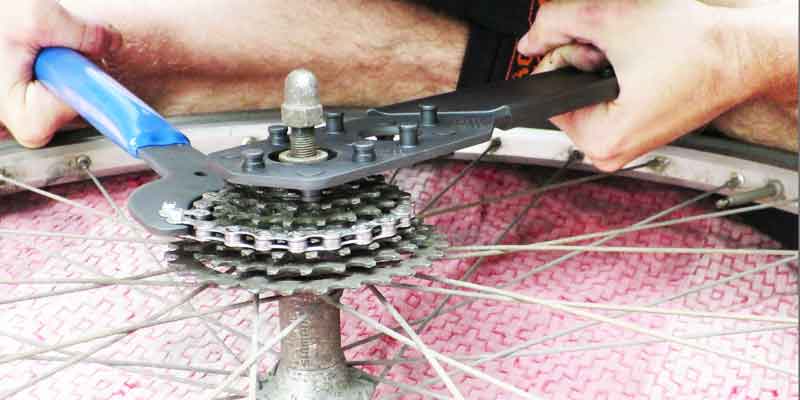 In this article I’m going to explain how to remove sprockets from a freewheel. My Koga Miyata Adventure had a rear wheel with a 7-speed Sachs freewheel on it. A freewheel that was not supposed to be there considering the Shimano SL-AT-50 thumbshifter was a 6-speed.

At first I thought I was dealing with a Shimano Uniglide cassette, which uses the same technology of keeping the sprockets in place using the smallest cog instead of a lock ring. However the “made in France” told me otherwise.

Unlike Uniglide cassettes the sprockets on the Sach cassette are not reversible. But, considering the cassette is probably from 1989, the teeth we’re in excellent condition.

The 80s we’re the years where Shimano would start to dominate the cycling industry with the introduction of groupsets, and high-quality components for relatively low prices. In the end I would opt to remove the freewheel body altogether. I was able to buy a brand-new 6-speed Shimano freewheel cassette (without any play in the body) for just over 13 euros. And since the chain needed to go as well I decided it would be a good idea to replace both together.

If I’m in need of a 7-speed freewheel I’ll use this one, but for now it was nothing but a learning experience in how to remove the sprockets.

The cassette consists of loose sprockets and spacers. The smallest sprocket has the spacer integrated into it, because the inside is threaded and screws onto the top part of the freewheel body.

Getting this sprocket of the hub is straightforward, if not for the fact that it can be really tight. Like a number of other objects that are screwed on (think bottom bracket).

And the chain actually serves as a wrench only tightening this sprocket even more through the decades.

And I had difficulty getting the chain whip in place, with the room between teeth seemingly smaller than the tips of the protruding elements on the chain whip. The end result was that because I only engaged two teeth at first I cracked one, but this is probably my fault in being too impatient.

When you remove sprockets from a freewheel make sure you protect your hands. The sprocket will loosen suddenly and it’s not uncommon to loose some skin on the knuckles in the process, by scraping them on the spokes of the wheel.

I had more luck on the second try.

And that’s how you remove sprockets from a freewheel!