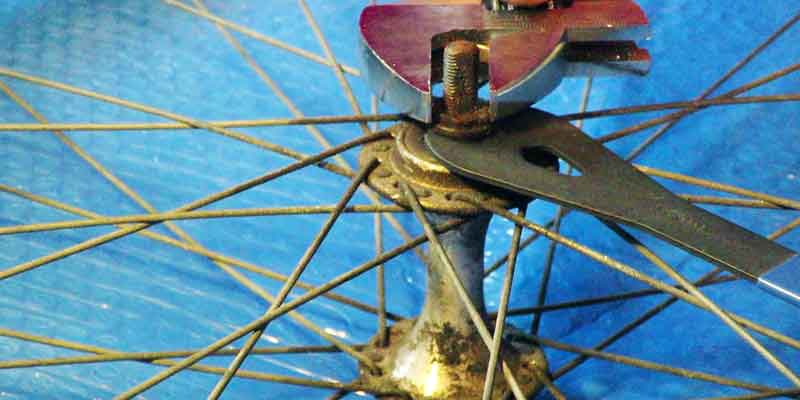 In this article I’m going to explain how to effectively overhaul your bicycle hub. Of course you have two wheels on a bicycle. And while both hubs of my Koga Miyata Adventure are in need of a thorough cleaning, this article concerns the front wheel.

But basically the process for either wheel is the same, with the exception that the rear one will have a cassette that needs to be removed first.

Overhauling a bicycle hub involves getting to the inside of the hub by removing the cone. You’ll need a special cone wrench. The particular one I’m using is a Park Tool 15mm Shop Cone Wrench SCW-15.

I only have one cone wrench and it’s this 15mm one. It fits the majority of cones so there’s no need to buy a whole set. There are wrenches which have multiple sizes within the same tool.

The reason why you’ll need this cone wrench is because it’s flatter than a traditional wrench. This is necessary because it won’t fit in between the hub and the nut on top of it.

As a general rule I only unscrew one side of the hub spindle. This way I know that when I put the wheel back together the spindle will be in the exact same place as before.

It’s also a good idea that before removing the nuts and / or spacers, to take pictures. That way you’ll also have some reference material to put it back in the same order.

With one of the cones removed the spindle can just fall out of the hub. Older bikes will use loose ball bearings so make sure that if one or more of these falls out as well, you catch them. I always keep a plastic cup available to store all of the bearings.

It can be a hassle getting all of the bearings out. Especially since they’ll be coated in grease and sticking to the inside of your hub. I use toothpicks to pry them out.

There should be as many bearings within the hub to take up all of the space on the bearing race, which is the part where the bearings connect with the hub. I counted 16 bearings when I got them all out, while I was expecting 18: 9 per side of the hub.

The bearings can also be damaged because of rust. The whole idea of overhauling your bicycle hub is to smoothen the ride. Pitted ball bearings are an obvious no-no. If your bearings look like the one in the photo, take it to your local bike shop and replace them.

Step 4. Checking the cones for pits

A further check indeed revealed that the hub could hold up to 9 bearings of the same size, so I added a single one per side to increase the load the wheel would be able to take.

Another check you need to perform when you overhaul your bicycle hub is looking at signs of wear on the bearing races of your cones. They’ll show up as pits and are usually caused when water has seeped into the hub.

Now I’m kind of a nut when it comes to bike restoration. So I not only clean everything, but remove rust as well as polishing everything. The added benefit of polishing is that it actually minimizes the risk of further corrosion by smoothing out the surface.

To remove the rust you can use a household product like vinegar. I use a rust remover because it makes the job much easier, improves the result and takes less time.

I have a small machine polisher to polish the parts. You can use this machine for various bike restoration steps, like polishing a crankset. including this one.

When every part has been cleaned it’s time to reassemble the bicycle hub. Grease the bearing race of the hub so the bearings will stick when being put in again.

Make sure the entirety of the bearing race is covered with bearings. In my case that would involve putting 9 bearings back into place.

The last step when you overhaul your bicycle hub is making sure the wheel rotates smoothly without having play in the hub.

Hold the wheel up while it rotates to feel if it runs smoothly. With your fingers on the finger-tightened cone you can either loosen or tighten it while it rotates in between your hands. If you’re satisfied with the result you can check the hub for play by pulling on the spindle.

This process takes a bit of practice before getting right. And tightening the cone itself with the nut on top usually makes it bind again. So I usually finalize overhauling the hub by tightening both the cone and the nut with the appropriate tools.

And that’s how you overhaul your bicycle hub!