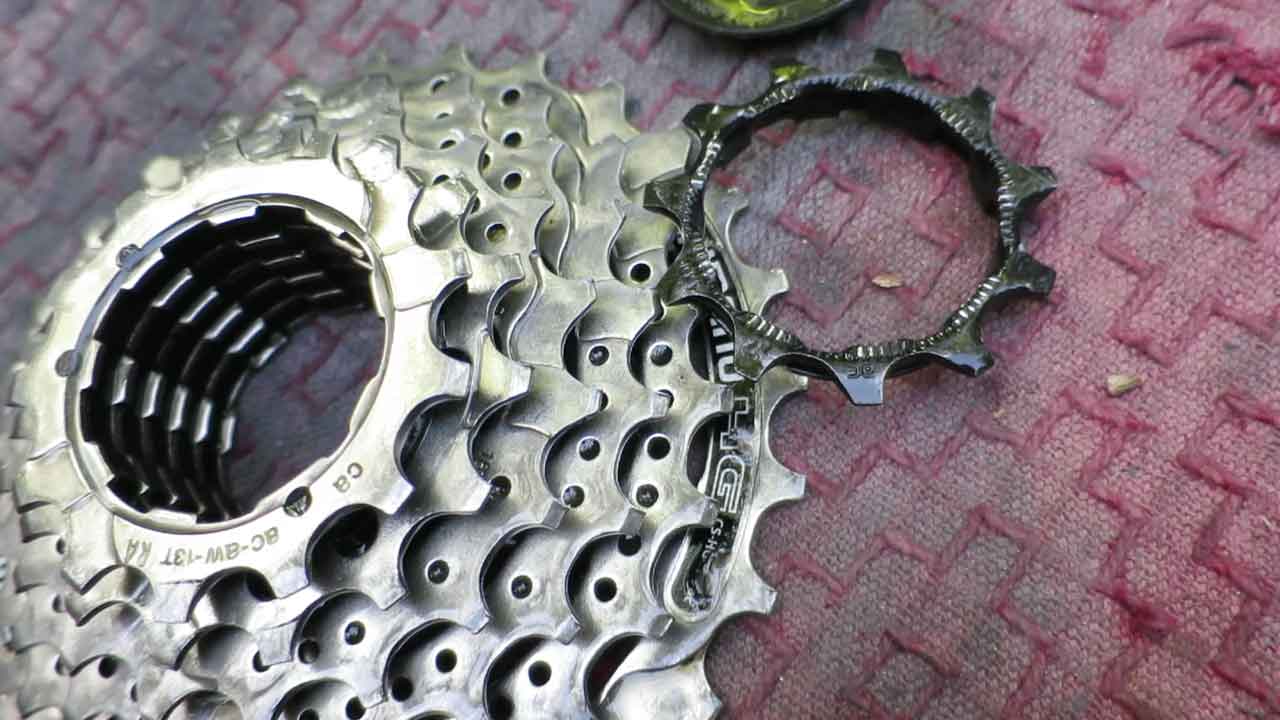 In this article I’m going to discuss how to go about cleaning a bike cassette with white spirit.

Everybody who rides a bike and cares for their wheels needs to know how to do this. Apart from speeding up the wear and tear on the entire drivetrain, not cleaning your cassette obviously doesn’t improve shifting.

The classic process of cassette cleaning is with it mounted on the wheel, and even the wheel in the frame. I’ve done this in the past many years until I had the tools to actually remove the cassette from the wheel.

It involves putting a thin rag or piece of cloth in between each of the cogs and pulling it back and forth. Since the cassette can only spin one way, the pulling motion ensures you’ll cover the entire area between sprockets.

I always found this procedure tedious and it hurt my already bad back. The process as described in this article doesn’t take more time, is easier and removes all of the stuff that might be sitting on your cassette.

I would not recommend cleaning a bike cassette with white spirit while it still sits on your wheel. White spirit and grease don’t go together very well and getting the stuff of again after applying it to your bicycle is almost impossible to do.

With the cassette of the bike you can simple clean and rinse it underneath a faucet.

I’ve also written an article about cleaning your entire drivetrain.

The only reason I never cleaned my bike cassette this way is that I didn’t have the proper tools. Different cassettes need different tools, but basically from the early nineties until now all cassettes work the same and require a lockring removal tool.

You’ll also need a chain whip to keep the cassette in place while you’ll turn the lockring tool.

And an adjustable wrench to turn the lockring tool, but that tool is less bicycle specific and probably everybody has one.

Obviously if these tools can be used to remove the cassette to clean it, they can also be used to actually replace a worn cassette.

Removing the dirty cassette is done by placing the lockring inside the opening where the skewer goes. For this to be possible you first need to remove the skewer. Don’t lose the small spring.

Then you can place the chainwhip around one of the sprockets of the cassette. I choose the sprocket which enables the chainwhip to be fully engaged and rotated almost the entire length of the chain. On a 7-speed cassette this will usually be the middle one or an 18-teeth sprocket.

With the chainwhip properly engaged turning the lockring with an adjustable wrench should be easy enough.

Cleaning the cassette removed from the wheel is as simple as can be. Dump a bottle of white spirit into a salad bowl and clean it with a brush. The muck should be coming off instantly.

The result is something else. Try getting that with your little rag.

Putting the cassette back on

When you put the cassette back on the wheel don’t forget to put some grease on the freehub body.

The cassette has splines on the inside to make sure it only goes on one way. You don’t need the chainwhip to tighten the cassette back on the freehub body. The adjustable wrench and the lockring tool will do the trick while the body keeps itself in place with the ratchets.