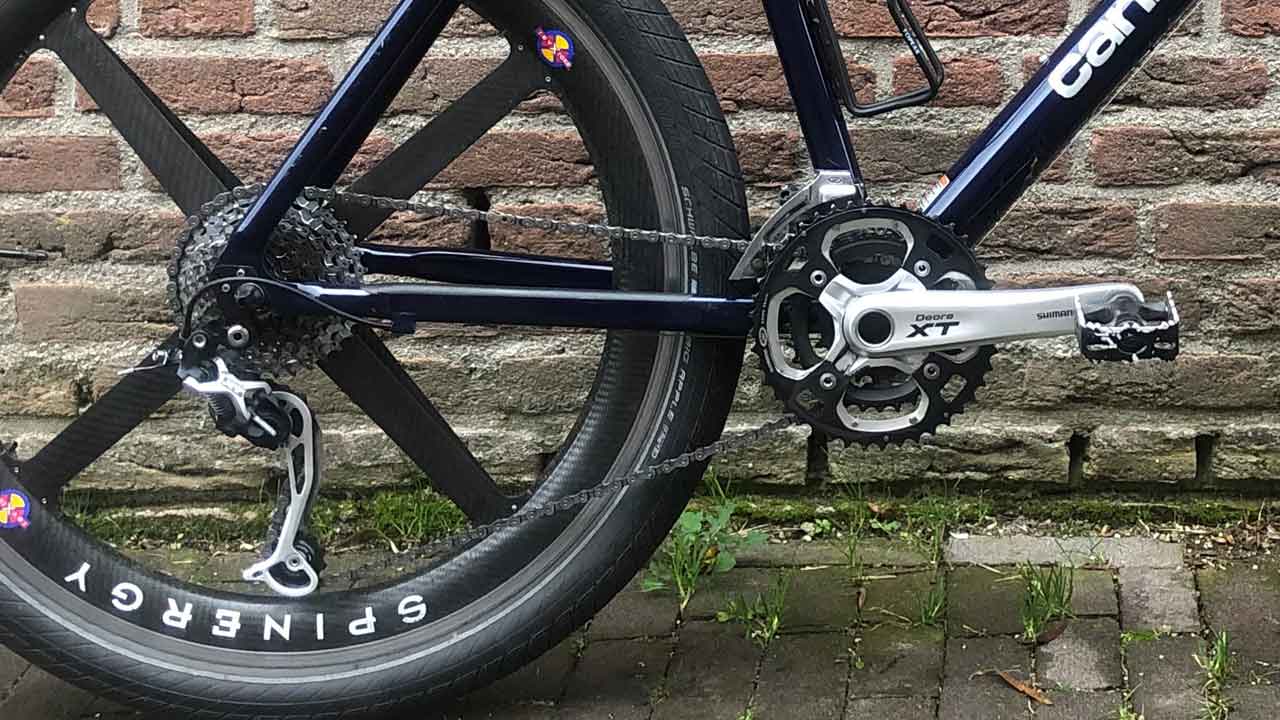 In this article I’m going to explain how to pick the right bicycle gear ratios.

Why changing your bicycle gear ratio

There are a number of reasons why you would want to change your bicycle gear ratio.

Older bicycles have far less gears than the 11 or even 12-speed bicycles of today. An 8-speed bicycle was considered a luxury in the 90s.

It also meant that not riding the gear you would like was commonplace as the jumps between gears could be too great to fit the cadence you would like. A specific gear would either feel too light or too heavy.

The drivetrain of a bicycle is set up in such a way that the gear thought of to be most frequently used is the one that makes the chain point straight backwards towards the sprocket.

For a 7-speed running a triple crankset it would mean you’d run the middle chainring and the fourth sprocket most of the time for the bike’s intended use.

Running either a smaller or bigger gear would change this alignment making it more askew. Although this is intended behavior since gears are meant to be used, permanently using less optimal gearing results in increased wear of the drivetrain.

Since I live in the Netherlands, which is mostly flat, and I use mountain bike gearing for road use predominantly, I find myself using the upper ratio of the sprocket. Besides a skewed chain, it also leads to use the tiniest sprockets, applying the same amount of wear on a smaller amount of teeth. This also leads to increased wear.

And for my 9-speed Cannondale Killer V, there’s a noticeable difference between gear 7-9 versus gears 1-5, which are basically never used.

Bicycle gear ratios guide us in determining what drivetrain setup is best suited for our riding style. It enables us to:

I left out the numbers for a granny ring (around 22 teeth) and started with a 29 chainring. This was the smallest chainring on my Super V. In turn this leads to the following table.

They’re all mountain bikes I have used for riding on flat tarmac. My cadence is rider specific, not bike specific, meaning it’s the same for all three bikes. So by plotting my preferred gear ratio on the chart I can reverse engineer what ratio is optimal for me.

In turn I can use this ratio to finetune a new drivetrain setup for the Killer V, which is worn and in need of replacement.

Which leads to the following chart:

The optimal gear for the bike would be the fourth gear (38-18). But I frequently went back and forth between fourth and fifth gear, which is an indication that the optimal bicycle gear ratio lies between 2.11 and 2.53 for standard road use.

I also know that with heavy climbs on the trail the 1.36 was way too big. I definitely need a sub-1.00 gear ratio for really steep climbing.

On flat tarmac I’m always on the seventh sprocket, which corresponds to a 2.23 gear ratio. That’s exactly what we would expect based on the sweet spot we determined from the M300 gear ratio, which was roughly between 2.1 and 2.5.

This full-suspension mountain bike is used on rougher terrain that feature steep climbs. I swapped out both chainrings, which means the CODA crank now has a 32 and 44 setup.

The bigger chainring in the front didn’t mean I could ride a lower gear. The jump between a 13-teeth sprocket to a 15-teeth one meant I would ride a 2.13 ratio. And we already saw that the 2.11 ratio on the M300 always felt too light.

I could’ve opted for a 34 or even a 36 front chainring, but that would probably get me into trouble on the climbs, because the crank doesn’t have a granny ring.

Which leads to the following chart:

As you can clearly see, for road-use of this bike I’m always in the upper range of gears.

Looking at gear ratios I used on three individual bikes that have similar characteristics I can calculate the optimal bicycle gear ratio.

You take the gear ratios of the upper and lower gear most often used and divide it by two. If you add another bike your division needs to be doubled.

Since I can use three bikes my calculation looks like this

This number absolutely makes sense looking back each bicycle’s chart and how I use the gears.

I’m looking to replace the entire drivetrain setup for the Cannondale Killer V.

2.41 represents a gear ratio most often used between these bikes and belonging to my preferred cadence.

Now we need to find a drivetrain setup where with the help of of the bicycle gear ratio chart where the 5th or middle gear of the 9-speed, is closest to my preferred ratio of 2.41.

It means the most often used gear will allow for the widest range in gears for my type of riding, the least amount of chain skewing and drivetrain wear, and the lowest frequency of chainring shifting.

I cannot achieve this with the cassette alone. I also need the front chainring to move up in the amount of teeth.

As a general rule of thumb, going two teeth up on the front chainring means you can go one gear lower in the back.

Based on this rule 36 seems to be the way.

But not all cassettes are equal with almost all of them jumping teeth when the number goes up. By filling in the chart you can see the most optimal cassette for you.

In my case I need to switch from a Deore XT mountain bike cassette to a road bike one. For instance the Shimano Ultegra CS-6500 9-speed cassette.

The 15-teeth sprocket (15T) in combination with a 36 chainring leads to a 2.40 gear ratio, which is just about perfect.

Cassettes starting with 12, 13, and 14 can all be scrubbed, because the 15T is in fourth, third, or second place, which is not what you want.

I really like the uninterrupted flow from 17 all the way up to 11 from the 11-21T version. It means that I have 2 gears below my preferred bicycle gear ratio and four above it.

I did consider wanting to sprint away from stop signs with the help of the 1.57. But I’d rather have the 16T 2.25 at my disposal which sits just below the 2.40.

So there you have it. Picking a new drivetrain setup with the help of calculated bicycle gear ratios.